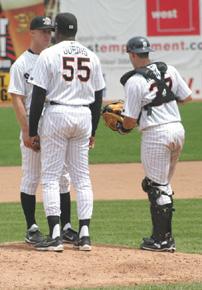 Pitching coach Ray Burris (55) is back with Erie along with pitcher Jared Gayhart and catcher Jeff Kunkel (37). Journal file photo by R.L. McCray 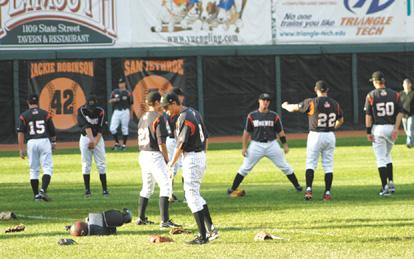 Pitching coach Ray Burris (55) is back with Erie along with pitcher Jared Gayhart and catcher Jeff Kunkel (37). Journal file photo by R.L. McCray

ERIE — Wilkin Ramirez is back with the Erie SeaWolves and is expected to star in center field for tonight’s opener in Trenton, N.J..

The other outfielders this season are Deik Scram, Andy Dirks and Josh Burrus.

The infield will look very similar to last year's, with Cale Iorg back along with Michael Bertram, Santo De Leon and Shawn Roof. Cesar Nicolas and Justin Henry will be new faces.

Henry, a second baseman, hit .257 with 14 doubles at Lakeland last season, while Nicolas hit .331 with 18 homers and 112 RBIs in an independent league.

Andy Oliver, a second-round pick out of Oklahoma State in 2009, will start his career in Erie after posting a 1-1 record with a 2.81 ERA over 16 innings in the Arizona Fall League. Oliver, a left-handed pitcher, went 7-2 with a 2.20 ERA while averaging 8.8 strikeouts per nine innings over 14 starts as a sophomore at Oklahoma State.

He will join Jon Kibler, Duane Below, Thad Weber and L.J. Gragnier, who all made appearances in Erie last season, in the rotation.

Audy Ciriaco (3B/SS) and Cody Satterwhite (RP) will start the season on the disabled list.

Satterwhite has a lingering shoulder injury. A second-round pick from 2008, Satterwhite paid a visit to Dr. James Andrews last week. Surgery is an option, but was not immediately recommended.

Kibler will start tonight’s opener at Trenton (7:05 start), while Below is set to open at home April 15 bersus the Altoona Curve.