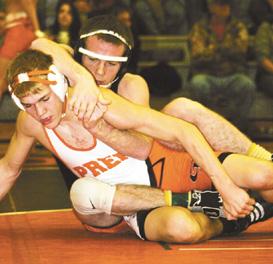 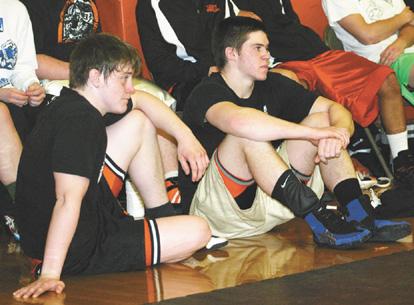 Corry has the luxury of two outstanding wrestlers who weigh in at 189 pounds, Nash Walters (left) and Michael Pollard. It depends on the matchups as to who wrestlers where. Journal photo by R.L. McCray

Corry has the luxury of two outstanding wrestlers who weigh in at 189 pounds, Nash Walters (left) and Michael Pollard. It depends on the matchups as to who wrestlers where. Journal photo by R.L. McCray

In sports, the old adage is that records were made to be broken.

This past weekend, two Corry wrestlers doubled their pleasure at the Beavers’ duals.

Seniors Jake Kondrlik and Michael Pollard both surpassed Shane McChesney and then Chris Bailey as the all-time winners in CAHS mat history.

Both Kondrlik and Pollard went 8-0 over the two-day event.

Jake claims he has higher goals than the school record for wins, while Michael was pleased to take down this feat.

“My first goal when I was in ninth grade was to try to get 100 wins,” said Kondrlik. “After I got that last year, I figured I could stretch it out and try to get the 125 or the record. I’m happy that I got it, but it’s no big deal.

“If Michael passes me or I end up ahead of him, it’s fine, it’s not the end of the world,” he claimed. “A medal at states is more important to me than the win record. That’s because I’m sure it will be broken down the line.

“At districts, hopefully I can do better than last year when I had that upsetting loss in the finals,” said Kondrlik.

He still wears Brandan Eck’s lucky yellow socks. Eck was home on leave over the weekend.

“It was nice talking to him, he’s been in Iraq,” said Kondrlik. “We talked about how I still wear his yellow socks.”

Pollard has been a pinning machine in his year, collecting No. 100 on Saturday against Cathedral Prep.

“Ever since I was a freshman, I kind of wanted to break the all-time win record,” Pollard admitted. “I’m not really competing with Jake, he’s such a good wrestler.”

With the duals, today’s wrestler gets more matches than in recent history.

“We do get a lot more matches now, but it’s getting more competitive now, it’s evening itself out,” said Pollard.

How about the set-up at the duals, with eight in two days?

“I don’t like it, it’s really hard on all the wrestlers,” he claimed. “I like tournaments and regular dual matches. I’m old school.”

How about his overall goals?

“I have that one goal in my mind, my ultimate goal is to be right up at the top (in Hershey),” said Pollard.

Pollard and Kondrlik will continue to work hard and see just how high the record goes.

They will be in action tomorrow when Corry has a dual meet at Titusville, then it’s on to the North East Invitational this weekend.