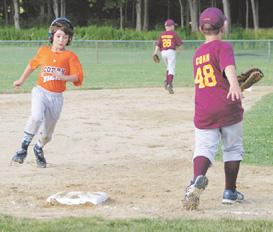 Corry hero Joey Perry heads for third base and is about to score a run in the second inning. Journal photo by R.L. McCray 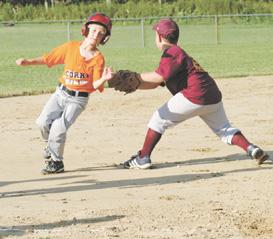 In the third Corry’s Bryton Lyon is tagged trying for third. Journal photo by R.L. McCray

Corry hero Joey Perry heads for third base and is about to score a run in the second inning. Journal photo by R.L. McCray

In the third Corry’s Bryton Lyon is tagged trying for third. Journal photo by R.L. McCray

Corry Minor all-star Joey Perry does, and Monday night he hit like the infamous Babe.

Perry’s first-ever homer proved to be the winning run as Corry held off North East 3-2 to advance to the quarterfinals of the District 3 Tournament.

“When we passed out uniforms last Friday, Joey said ‘coach, now I have to hit a home run for babe.’ I said what do you mean?” wondered Bracken.

“He turned around and showed his jersey number of 3 (that Ruth wore),” he continued. “His dad is a big Yankee fan and has taught him a lot about the tradition.

“Not many kids nowadays embrace the past players like that,” Bracken claimed.

The game was much tighter than expected as North East hung in there.

Corry took a 2-0 lead in the second. Kenny Nichols was hit by a pitch, Perry was inserted as a pinch runner. He stole second before Kameron Beeman walked. Both scored on David Anderson’s single.

“Our pitching was superb, allowing just one hit,” Bracken pointed out. An error allowed NE to score its runs in the fifth.

Bulldog Tyler Burlew came on to retire the last six batters — three by strikeout — for the save.

Austin Goodsel started and allowed one hit and three walks in three innings, striking out four. Beeman threw one inning plus, with two walks, fanning three.

Jimmy Watts had the lone hit for North East. Corry plays Saturday at 4 p.m. against LeBoeuf at Bracken Field.