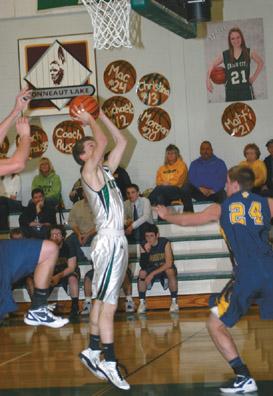 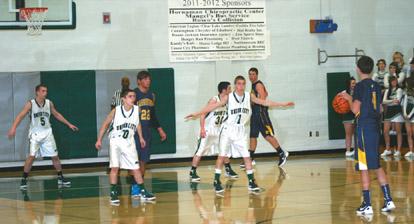 Journal photo by R.L. McCray - With 4 1/2 minutes left in the first half, and Union City sitting in a zone defense, Saegertown simply held the ball until the last few seconds before shooting on Wednesday.

Journal photo by R.L. McCray - With 4 1/2 minutes left in the first half, and Union City sitting in a zone defense, Saegertown simply held the ball until the last few seconds before shooting on Wednesday.

UNION CITY — This was a senior night to remember.

Union City’s wrestlers set a school record for points in a match in Wednesday’s 82-0 rout of winless Iroquois.

UC, now 8-4 overall and 5-3 in the region, collected nine forfeits and registered three pins in a match that lasted less than a half hour.

Tim Vargo won 18-3 by major decision. In the last bout of the evening, Russ Adams had Jake Kruize on his back three times before earning a 15-0 tech fall. That came at the 4-minute mark as the second period expired.

Union City is right back in action tonight with a match at Cambridge Springs.

See Thursday, February 9, 2012 issue of The Journal for complete story.