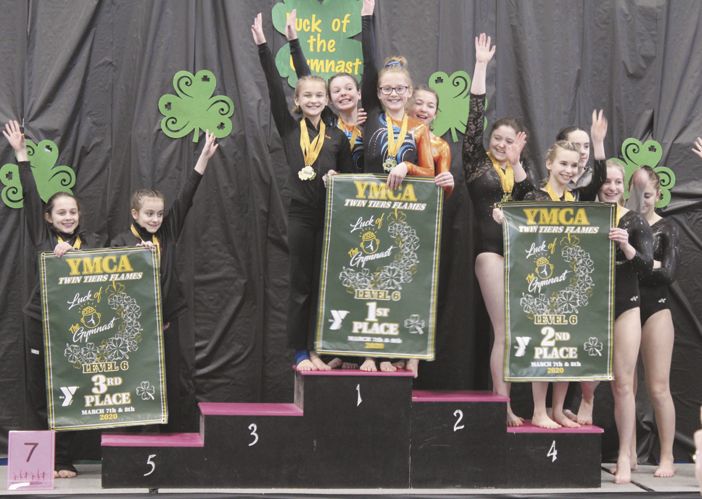 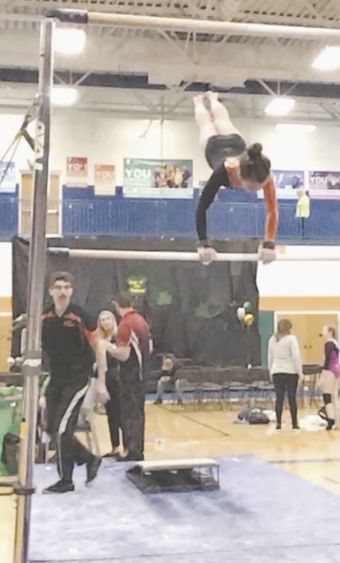 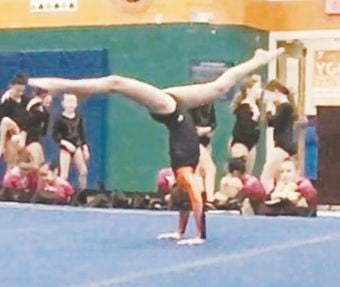 Caira Harvey performs a back walkover during the floor exercise. 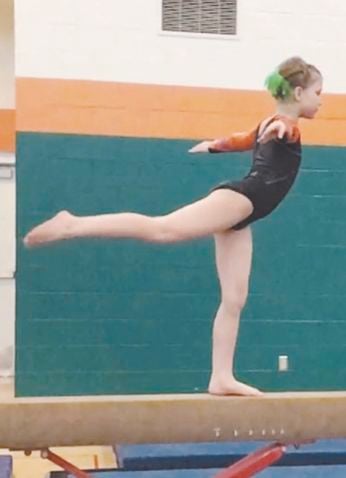 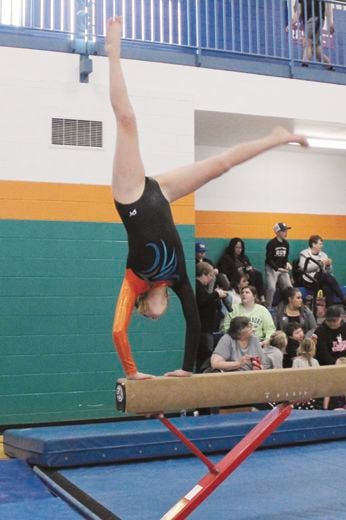 The YMCA of Corry Tumbling Tigers made their way to Olean, N.Y., where the Twin Tiers Flames hosted “The Luck Of The Gymnast” invitational.

It has been said that “luck” is the result of hard work and dedication
Both paid off again for the Tumbling Tigers as they had two all-around individual champions in Marleigh Martin (Level 6) and Ava Martin (Level 4), and the Level 6 team hit a new high team score (71.2) to take home the team championship.
Four girls medaled on every event and this final regular season meet was the top scoring meet for many of the gymnasts.
Marleigh Martin (Level 6) was beam champion (9.0) and placed second on bars (8.9*), third on floor (9.45), and fifth on vault (8.5). She claimed the all-around championship with a 35.75.
Adding to the Level 6 scores were Ava Hallberg, Kate Slocum and Grace Allen. Hallberg placed second on beam with an 8.7 and third on vault with an 8.6. Hallberg added new highs on floor (9.0*) and bars (8.3*) on way to an all-around score of 34.6* placing her fourth overall. Slocum added a fourth on vault with an 8.55 and a sixth on floor with a 9.3, along with an 8.2* on bars to help her to a sixth in the all-around (33.65). Allen placed second on floor with a 9.5* and also on vault with an 8.75. Allen finished eighth in the all-around with a 33.35.
Lillian Johnson (Xcel Gold) had the second highest all-around score for the Tumbling Tigers with a 35.75* good for fourth place.  Johnson was vault champion with a 9.45* and medaled on bars (9.1*, fourth place), on beam (8.7*, fourth place), and added a fifth on floor (8.5*). Morgan Martin (Xcel Gold) placed third on bars (9.2) and added sixth place finishes on vault (8.8) and floor (8.45) to finish sixth in the all-around (34.85).
Ava Martin (Level 4 all-around champion, 35.1) medaled across all events. Martin championed two events: vault (9.0*) and beam (8.6) and added a second on bars (9.05*) and a fifth on floor (8.45).
Laikynn Bayle and Callie Breauchy joined Martin at Level 4. Bayle medaled on each event, placing fifth on vault (8.6), fourth on bars (8.85*), fifth on beam (8.0), and sixth on floor (8.35) on her way to a fourth place in the all-around (33.8). Breauchy was seventh on both bars (8.1*) and beam (8.0) on her way to an eighth place in the all-around with a 31.9.
“The Level 4 team was excited to hear that at the league championships the team scoring would be based on the top three scores, enabling them to compete for a team banner,” said coach Bruce Fielding.
The league championships were to be held this Saturday in Meadville but have been postponed. That was for Levels 2, 3, and all Xcels. Levels 4 through 9 are tentatively set for March 28 in Greensburg.
Addyson Lilley (Xcel Silver) took home third place for her floor routine (8.55*) and placed fifth on beam (8.4) and sixth on vault (8.7*) to help raise her to a sixth place for her all-around (33.65*). “It was great to see Addyson step up and have such a great meet. It looked like she was really having fun during the floor routine,” Fielding said. “Through her energy she pulled the spectators onto the floor with her, as evidenced by her score and placement.”
Alivia Swan (lvl. 3) showed that hard work pays dividends, as she medaled in each event and was vault champion with a 9.0.  Swan placed fourth on beam (8.3*) and floor (8.65*) and placed fifth on bars (8.4*) to complete an all-around effort (34.35*) placing her fifth. Caira Harvey was bar champion with a 9.0* that helped her to a sixth place in the all-around with a 32.7. Paiten Harvey placed eighth on beam (8.45*) and vault (8.7).
The Level 2 Tumbling Tigers shined on beam, each receiving their best scores of the year. Maggie Johnson placed fifth on bars with an 8.2* and added an eighth place on beam with an 8.1, helping her to finish eighth in the all-around (31.45). Kara Collins was steady and consistent finishing eighth on bars (7.8*) and a top ten on beam (7.9). Paisley Harvey finished seventh on bars with a 7.9* and 10th on beam with a 7.6.
The YMCA of Corry Tumbling Tigers now continue to advance skills in preparation for next year and refine their current routines for league and state championships as they look toward a rendezvous in Long Beach, Calif., for the national championship.
(* denotes personal best score)
...