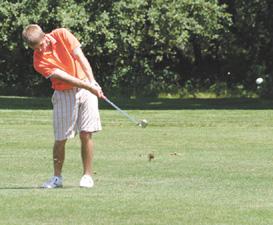 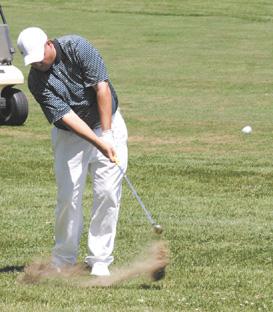 Mike Frisina makes his last putt on No. 18 on Sunday. Journal photo by R.L. McCray

Mike Frisina makes his last putt on No. 18 on Sunday. Journal photo by R.L. McCray

Mike Frisina had not played a round of golf at North Hills in almost one year, that’s when he captured the 2009 City of Corry Golf Championship.

Frisina, who is serving a college internship this summer at Winchester Country Club in Virginia, sported a new look on Sunday — white pants.

But it was like old times for the 2008 Corry High grad.

Frisina never had a bogey over the two-day, 36-hole city tourney and led start to finish winning by five strokes over classmate and good friend Greg Gurdak.

"I just wanted to hit all the fairways and all the greens, and I did," he said after shooting 33-34 for a 67, following Saturday's round of 68 at the Corry Country Club.

"It’s nice to play with Greg again," he admitted about the dynamic high school duo who played 1-2 for Corry for three championship seasons.

"The course was in good shape, like the Country Club," Frisina claimed. "I like the speed on the greens. I just played my game."

Gurdak and Erie's Dave Spitzer started the day two strokes behind after 70s at the CCC. Gary Merkle had a 71 on Saturday.

But it didn't take Frisina long to expand his lead and just played safely over the back nine.

Finishing third was Sunday's hottest player, Gannon's Matt Ferrie. He shot 32 on the front and came in at 69. That followed Saturday's 74 for a 143.

Chuck Mack was back in the winner's circle taking second flight at 168. That was three strokes ahead of Corey Murphy.