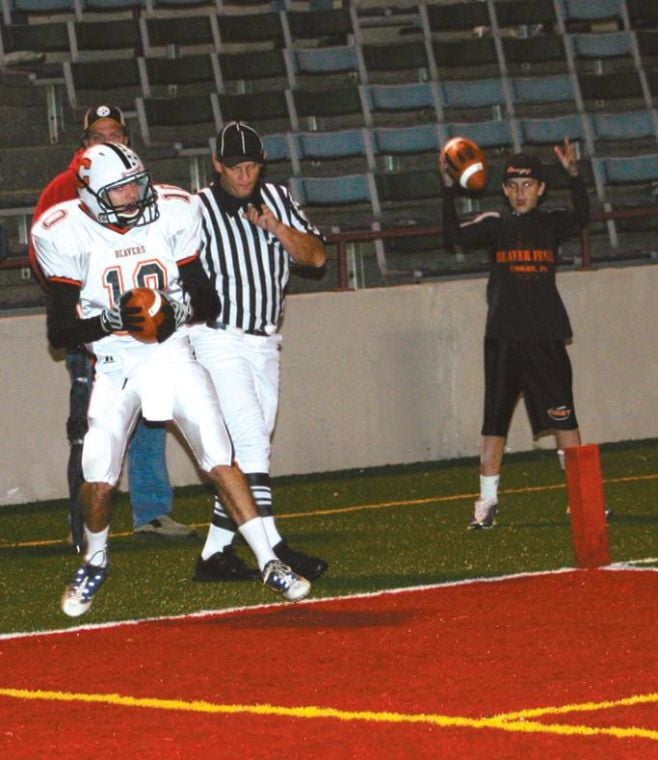 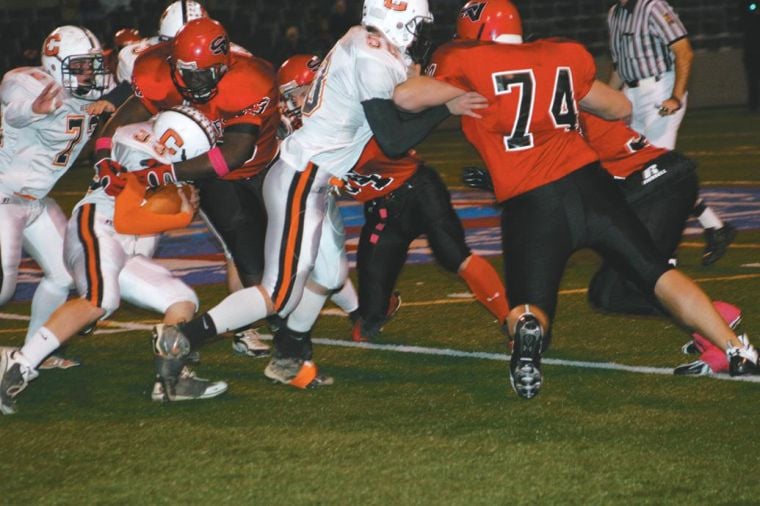 Journal photos by R.L.McCray You can see the obvious size advantage for Vincent as 350-pound Emmanual Wells engulfs Corry’s Adam Zimmerman in the first quarter of last night’s game in Erie.

Journal photos by R.L.McCray You can see the obvious size advantage for Vincent as 350-pound Emmanual Wells engulfs Corry’s Adam Zimmerman in the first quarter of last night’s game in Erie.

Vincent is a fast team.

That size and speed did in Corry last night as the Beavers suffered their first loss of the season, 41-18, on a dreary and often-times rainy Thursday at Veterans Stadium.

After having a field goal blocked on its first possession, Corry scored first on a fourth-and-goal pass to Craig Marti (see photo at right).

“The kickoff return after our first score was huge, but we didn't tackle very well,” said Corry coach Homer DeLattre, his team now 5-1 after the non-region setback.

“Vincent is very athletic, we were in position but just didn't execute the tackle,” he stated. “It’s not a region game, so we can move on.

“I told the guys after the game that no one is going to work harder this week than I will, and I need the same from them next week at practice, we have to get better,” said DeLattre.

Just how bad were things for standout Beaver quarterback Scottie Frisina who was 10 of 35 passing for 151 yards?

He saw his No. 12 jersey get ripped by the mammoth Vincent line, so he switched to 14 in the third quarter.

Down 14-6, the Beavers gave up a pivotal score with :52 left in the half with Brandon-Akins Jones going 5 yards off a double hand-off.

Akin-Jones scored again in the third quarter making it 28-6.

A 40-yard pass play from Frisina to Mitchell Anderson set the table for Corry’s second score, a QB sneak by Frisina with 9:04 left in the third quarter.

Frisina scored his second touchdown in the fourth quarter.

He wound up with 74 yards rushing, often running for his life. Cory Owens made five receptions for 53 yards.

Vincent, now 4-2 with losses to Cathedral Prep and General McLane, had three ball carriers with 93 or more yards on the ground.

If Corry wins its region, and Vincent does not — being behind Prep, it’s possible the Beavers and Colonels will meet in the first round of the Class AAA playoffs.

“I don't feel that we played to our abilities and ‘if’ we get another chance, I feel we can do better,” said coach DeLattre. “That is ‘if’ we can win our next two games.”

Next Friday, the road trip continues with a key league game at Grove City.

“Grove City runs a similar offense, they also have great size and speed,” said DeLattre. “We can't let this loss affect our week of practice.”