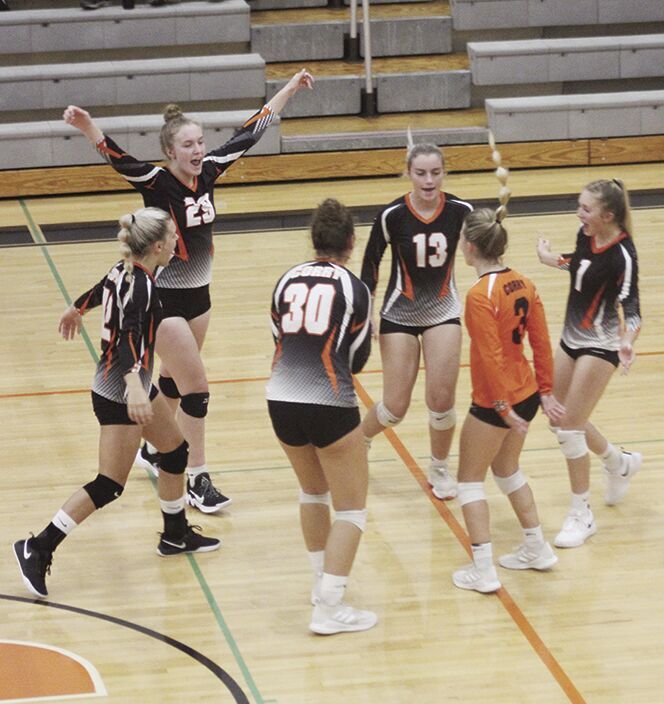 Corry's girls, led by Miranda Nickerson (29), celebrate scoring a point in the first set of Wednesday's home match against Maplewood. 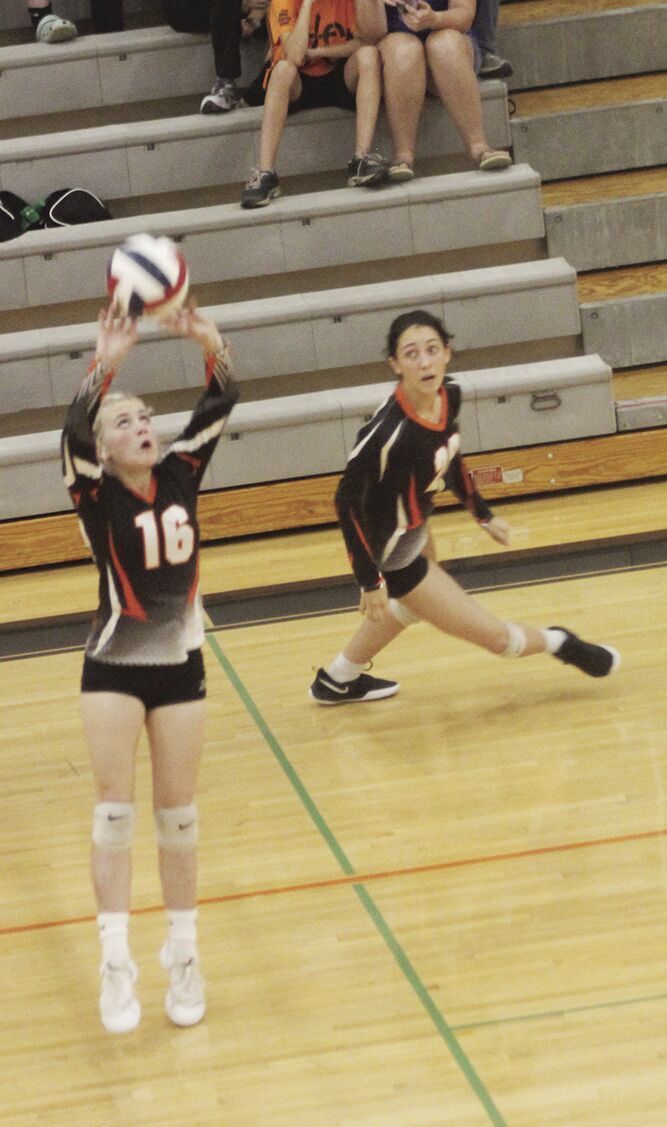 Corry's Payton McCray (16) sets for the Lady Beavers in the home match.

Local fans able to get to the Beaver Dam (East Gym) on Wednesday night enjoyed a great “roller coaster ride” of a match between two well-respected programs.

Between Corry and Maplewood, the two teams have combined to win seven District 10 titles and win two state championships in the past five years.

The first set was as tight as one would expect in a big match, both teams traded the lead back and forth with the biggest gap being three points by both teams.

Senior Miranda Nickerson had a solid first game and made a timely tip into the middle of the court to give Corry the serve at 23-24. Unfortunately, Corry served just long, and Maplewood took the first set.

The second set started out just as tight with neither team building more than a two-point lead. With the score 9-9, Corry started to take control behind two kills by senior Rachel Brady and then a double-block by seniors Maggie Dow and Brady. Freshman middle hitter Aubrey Vanderhoof had three consecutive kills set up by her classmate, freshman setter Payton McCray to help build an 18-13 lead for the Lady Beavers.

The second set ended with five kills, three by Dow and two by Kaylee Pierson.

The all-important third set was controlled early by the Beavers and when things got tight at 14-13 Corry, Pierson and Dow had kills to stretch the lead to three points.  Maplewood fought back to a 19-18 deficit when freshman opposite hitter Allison Sawyer hit a sharp cross-court kill to build the lead back to two points.

Corry maintained the lead until 24-23 when Maplewood’s junior outside hitter Sadie Thomas pounded a kill to tie the score at 24-24.

After a long back and forth rally, Thomas just hit the ball long and Brady gave Corry the 26-24 win with a huge kill right down the line.

Finally, after being down 1-7, Corry started passing a little bit better, allowing Brady and Sawyer to both get kills to close the gap to 6-10. Pierson had two more of her career high 11 kills to make the score 9-10.

Maplewood served tough and stretched the lead back out to five (12-17) before Corry’s tough serving got them back into the game. A Brady kill put freshman Makenna Moore at the service line where she served two aces sandwiched around another Brady kill.   Corry climbed all the way back to a 19-19 tie on a service ace by Vanderhoof. The two senior Corry outside hitters, Brady and Pierson, closed out the match 25-21 with two kills each.

“The coaching staff is really proud of how the team played tonight,” head coach Kelly Goodsel said. “The difference in the match was Corry’s serve receive passing, other than early in the fourth set, Corry passed really well allowing Kiran Bugbee and Payton McCray set all of the hitters.  Both Bugbee (35 assists) and McCray (10) had career highs for the night.”

Pierson had a career high 11 kills, fellow seniors Dow and Nickerson played great with six and four kills respectively, and the freshmen really contributed (Vanderhoof with six kills and Sawyer with four kills).

The JV team also won Wednesday, two sets to one in another hard-fought battle.  Varsity improves its overall record to 7-2 and is 6-1 in Region 4.

The team is right back at it tonight with senior night festivities on the agenda when they host the Braves from Iroquois.

JV starts at 6 p.m. with senior festivities and the varsity match to follow.