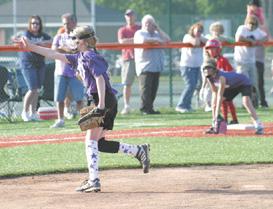 Rossbachers Emilie Miller throws to Jill Williams (3) for an out at first base. Journal photo by R.L. McCray

Rossbachers Emilie Miller throws to Jill Williams (3) for an out at first base. Journal photo by R.L. McCray

The insurance gals got off to a fast start offensively when Katelyn Sipes lined a single up the middle and stole second and third. After Kaylee Street walked and went to second, slugger Jill Williams lined a single to center scoring both runners making it 2-0. Williams scored on a fielder’s choice by Kesslie Hall giving Rossbachers an early 3-0 lead that they would never lose.

TJ’s came back with two runs in the bottom half of the inning when, after a walk, Rachel Dingfelder singled and scored on a two-run hit by Cayla Suchar cutting the lead to 3-2.

With Rossbachers up 4-2 heading into the top of the fourth, Courtney Long and Lexi Cubero reached on back-to-back errors that allowed Long to score. Cubero was knocked in on the first of two hits by Brianna Sutherland which made the score 6-2.

Rossbachers blew the game open in the fifth when Sipes walked and scored on a single by Street. Street would later score on another RBI single by Williams making it 9-2.

The insurance brokers tallied three more times in the top half of the sixth and TJ’s would score its final run of the game in the bottom of the frame closing out the Major girls season.

Rossbachers was paced offensively by Sipes and Williams going 3 for 3 and Williams’ four RBI. Abbey Whitaker and Sutherland collected two hits, while Brooke Joncas and Street had the other hits.

TJ’s collected three hits in the game with Suchar and Dingfelder adding singles and Lexi Bowen smashing a long triple.

Street picked up the win pitching four innings while Dingfelder absorbed the loss for the ice cream gals.

The Major girls start all-star action on Tuesday June 29 against Wattsburg in Columbus.