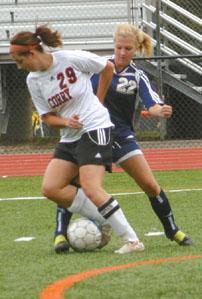 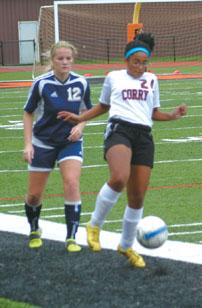 What a difference in halves.

After the Corry girls soccer team played Warren to a scoreless standoff in the first half, the visiting Lady Dragons scored in bunches and recorded a 5-0 win over the Beavers.

Warren had two near-misses to start the second half, then Kaitlin Ishman took a long pass and scored on a breakaway. A short time later, sweeper Emily Ashbaugh converted a penalty kick.

Ishman (see photo above) finished with two goals, as did Kaitlyn Levesque.

“The girls knew this would be a tough game,” reported coach Gary Hogue. “We were short on substitutes, but the girls held their ground.

“Sam Pratt was outstanding in goal,” he claimed. “She saved several point-blank shots. I am amazed that she is so strong in goal but only has two years of experience. The defense was physical. They did not give up easy shots.”

The next match is Thursday at 4 p.m. at Mercyhurst Prep, the returning state champs.