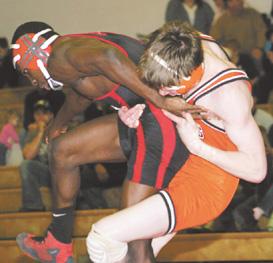 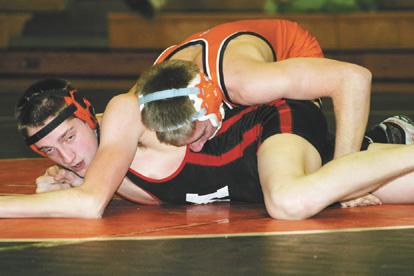 Beaver Cody Bailey gets a third-period reversal on Jimmy Shields in getting a 9-0 major decision at 140. Journal photo by R.L. McCray 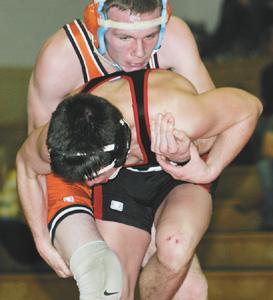 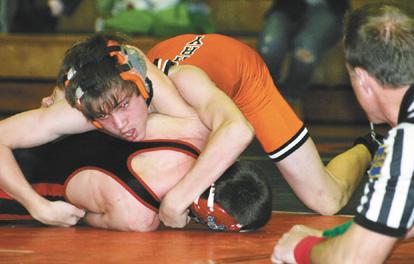 Corry’s Levi Catalfu is about to pin Meadville’s George Burrows in the second period of last night’s match at 112 pounds. Journal photo by R.L. McCray

Beaver Cody Bailey gets a third-period reversal on Jimmy Shields in getting a 9-0 major decision at 140. Journal photo by R.L. McCray

Corry’s Levi Catalfu is about to pin Meadville’s George Burrows in the second period of last night’s match at 112 pounds. Journal photo by R.L. McCray

With the busiest weekend of the season on tap, Corry’s wrestlers were hoping to supply a little momentum for their own duals in last night’s region match against visiting Meadville.

A year ago, the Bulldogs bested the Beavers in the semifinals of the District 10 Team Duals and Wednesday’s contest may go a long way to determining just who qualifies for this year’s D-10 event.

Both sides played the strategy game bumping wrestlers around looking for the best match-ups. In the end, after taking a 25-0 lead, Corry prevailed, 38-29.

“They could have fielded a full team but they chose not to,” said Corry coach Skip Laird, his team now 3-1 in the league. “They chose to stay away from two of our better guys.”

Corry moved its upper weights up a class, starting with Jesse Preisler at 160. He scored a 14-1 major decision and Zac Morris followed with a 72-second pin.

Beavers Dustin Taubert and Michael Pollard received forfeits as the ‘Dogs opted to move Kevin Thompson, a runner-up at Tool City at 215, to heavyweight for perhaps the biggest bout of the night.

Corry’s Nash Walters got he early lead and held off Thompson’s rally for a 5-4 decision.

“That was very, very nice for Nash,” said Laird. “This is a really good story on a kid coming back to us almost in a new body, new person. The young man has matured so much.”

With the 25-0 lead, Corry would need at least one more key win.

And the Bulldog got the first takedown. Catalfu escaped and took a 3-2 lead with a takedown of his own. After an escape to start the second period, Catalfu took Burrows down and decked him (see photo) in 2:33.

That gave Corry a commanding 31-6 advantage.

Meadville scored a pin and decision cutting the gap to 31-15 before Beaver Kevin Kerr returned to the lineup after an eye injury a month ago. However, he drew Sheltom Mack, a returning district and regional champ.

Mack opened a 5-0 lead in the first before Kerr settled in. Kerr escaped to start the third but Mack’s late takedown left it at 8-1 and the lead at 31-18.

“Kevin beat him last year in the dual, I think that motivated Mack,” said Laird.

But Beaver Cody Bailey jumped on Jim Shields for a 5-0 first-period lead, then added another takedown and third-period reversal for a 9-0 major decision.

Jake Kondrlik could wrap it up with a win at 145, but that did not come easy against Nick Limano. The Bulldog got the first takedown before a reversal left it tied at 2 after one. Another reversal and escape put the Beaver senior ahead 6-3 after two. Limano landed a late reversal to make the final 6-5 for Kondrlik and a 38-23 Corry lead.

Kondrlik improved his record to 21-4 and now has 122 career wins. Pollard stands 22-1 with 121 total victories. Shane McChesney has 122 career wins at CAHS, second only to Chris Bailey at 125. So that all-time record should fall with this weekend’s Corry Duals.

The Beavers open up Friday against General McLane, another pivotal match for the D-10 seedings. “That first match is the most important, we need to focus on that match, they’ve placed ahead of us at two tourneys so they are the favorites.

“So we need to take care of things against McLane,” he continued. ‘”We really look forward to these duals, we embrace them.

“We are at home and that’s important,” Laird. “We weigh everyone in and may use a few different guys depending on who we are against and the matchups.”

Corry does not wrestle Cathedral Prep until Saturday at 11 a.m., and has already lost a region dual to McDowell.