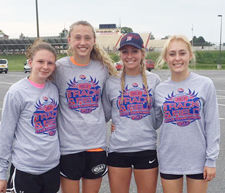 SHIPPENSBURG — The PIAA Track and Field Championships got under way this morning at Seth Grove Stadium.

Corry’s 3200-meter girls relay team of Ryann Brundage, Brie Sutherland, Kessli Hall and Ida Larsen ran a time of 10:25.69 in the heat. That time was last in their heat.

His best jump reportedly was 42-8.

Brundage, a sophomore, will throw the javelin on Saturday. Her 131-foot throw at districts has her tied for fifth in the seeding. The top throw is 144-8 by Connellsville’s Madison Wiltrout.

Villa Maria, which has won two of the last three Class AA girls 3200 relays, qualified for Saturday’s final. But the Victors lost time because of a dropped third hand-off between sisters Grace and Claire Brown. Claire Brown recovered enough to  place in the top three of the Victors’ heat.

First-seeded Seneca and second-seeded Harbor Creek lived up to their billing in the Class AA boys 3200 relay. Each won their separate heats and qualified for Saturday’s final.