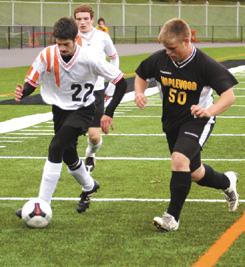 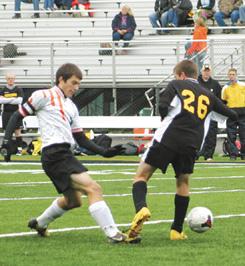 In the earlier home match with Maplewood, David Hajec battles for the ball. Journal photo by R.L. McCray

In the earlier home match with Maplewood, David Hajec battles for the ball. Journal photo by R.L. McCray

Corry senior David Hajec broke the school record for goals in a game yesterday blistering home six goals as Corry concluded its season with a 13-0 win over hapless Maplewood.

Hajec broke the prior standard of five goals shared by Jordan Schrecengost (versus Saegertown) and Joey Ugino.

“It couldn't happen to a better kid,” claimed assistant coach Mike Schrecengost. “Dave has been a great leader and is a class act!."

Corry led 5-0 at the half, four goals off the foot of Hajec who is also the place-kicker on the Corry football team.

He finished with six goals while fellow senior Brandon Fronk had three. Jamie McClelland netted two goals while scoring once were Andy Hajec and Matt Blair — the latter converting his first-ever varsity goal in his final game.

The shutout goalie was Tyler Rash.

“It was nice to finish on a positive note in a game in which everyone got in,” said coach Schreck. “We have a great bunch of student athletes on our soccer team. We are proud of their efforts."

It was a day of mismatches in Region 2. Warren ended 14-0 as Troy Burns scored five goals in a 12-0 win over Saegertown. Burns has fired in 46 goals this season. Meanwhile, Eisenhower (11-3) blitzed Franklin 12-0 as Conor Flynn had a hat trick.