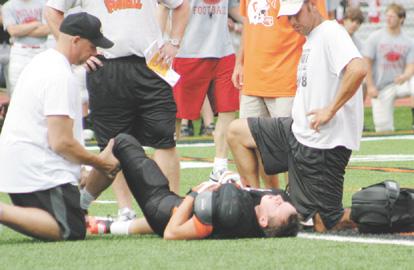 The first week of practice and the first scrimmage are now on the books for the Corry Beavers who hosted General McLane Saturday morning at Sheen Field.

It was hardly the way CAHS wanted to start out when running back Adam Zimmerman burst up the middle for 12 yards but was leveled and knocked out of the contest with a leg injury.

“Our offensive line over the last few seasons has really improved, (coaches) Jeff Goodwill and Bill Ross have done a very good job at developing our lineman.

“It always hurts when you lose one of your starters,” he said of the sudden loss of Zimmerman. “Ethan (Redrup) and D.J. (Warrick) did a great job filling in. I think Adam will be fine.”

Corry is starting over after the graduation of record-setting quarterback Scottie Frisina. Matt Cragg is now the starting QB.

“Matt did very well, he is very explosive in running the ball and is really going to help our running game,” said DeLattre. “The passing game will come along, its not a concern for me at this time. There are not many sophomore QBs starting in high school football, I feel that we have one that is going to be a very good player.

“The whole offensive and defensive line play really impressed the coaching staff,” he claimed. “Our line is the biggest it has been in years. This is the first year in a while that we have a starter on the offensive line over 200 pounds.

“Everything is correctable, our guys just need to do a better job of translating the drills we do at practice into game situations,” DeLattre claimed. “Most of the mistakes that were made are the things the coaches are constantly preaching at practice.”

Corry has a few days before Friday night’s second scrimmage at Harbor Creek.

“We will continue to drill each position and we will be better next week,” said DeLattre. “We will also start getting into some of our game planning for Girard.”

The official season kicks off with Corry visiting Girard on Friday, Sept. 3.

Then come games with Grove City, at Meadville, Oil City and the long haul to Slippery Rock.

“This is one of the toughest schedules I’ve ever seen, there are no breaks in there,” said assistant coach Ross, whose been in the business for more than three decades.