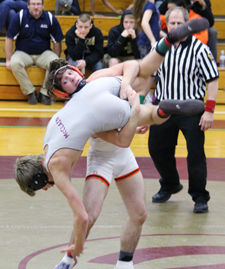 Beaver Joey Perry in complete control in the 132 finals. 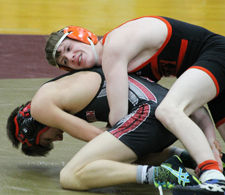 Beaver Joey Perry in complete control in the 132 finals.

Corry, missing a couple of starters, placed fifth as a team.

“Due to various circumstances beyond our control we were undermanned going into this,” noted coach Greg Barnett. “Coming into the tournament, the seeds weren't favorable for either Perry or Burlew, as both came in with fourth seeds.

“Perry put together another good tournament, beating both the number two and number one seeds,” he pointed out.

He survived a last-second flurry earlier in the match won 4-2 over Logen McClain of Ridgway.

“Burlew, in my assessment, wrestled the final in the semifinals with the other best kid in the weight bracket. The only reason the match didn't go into overtime was a controversial call that most referees don't make. It was a third caution that resulted in a point. The third caution came from Tyler's hands not being placed properly on the mat while in the bottom position making it a 4-3 loss.

“However, we need to find a way to win whether we agree or disagree with a referee’s call,” Barnett admitted. “Tyler looked extremely dominant in his third-place match.”

Burlew blanked Iroquois’ Joe Galvin 9-0 in the consolation finals. He bested the Brave 7-5 on Friday night.

Logan Munsee is down to his optimal wrestling weight at 113 and was seeded in a favorable spot in the bracketing, according to Barnett. “I was really happy to see Logan put things together and take out both the second seed in the semifinals (7-5) and the first seed in the finals.”

That was a 4-3 win over Lakeview’s Derick Uber. Munsee prevented Uber from escaping from the bottom position for the entire third period in order to gain his first varsity tournament title.

“One kid who normally doesn't get headlines, stepped up,” Barnett pointed out. “Hunter Fink, a freshman who gives up 10 pounds every match, wrestled tough and placed. I can't say enough about his toughness and determination.

“Dylon Tucci, in his second year wrestling, only won two matches last year. This year he has showed up for us a couple of times big,” he said. “He placed and it says a lot about his improvement. Parker Curtis was bumped out of his spot and was wrestling over his (actual) weight at 120. He worked his way back in the consolation bracket to place fifth.

“Robby Brown, when motivated, can really get the job done,” said Barnett. “I see him making some noise in the future.

“Unfortunately, we have lost Jack Gill for the rest of the season,” he noted. “His record was 7-1 before his injury. We are going to miss his presence in the lineup. On a positive note, Tucker Harrington is catching on quickly and got his first win on the mat. Cougar Vannucci went 2-2, he earned team points for us and wrestled his heart out.

“We were missing our seniors, but it felt like a moral victory,” Barnett stated. “ I was so happy with this group of wrestlers. “I firmly believe if we had our full lineup we would be sitting on top of the team championship.”

On Wednesday, Corry has a region match at Union City. The Bears are 10-2 overall and this could be a tight match.

NOTE: Eisenhower’s Louie Head, a former Corry Kid wrestler, was named the “most outstanding wrestler” at the 18-team Patrick J. Morales Tournament in Falconer, N.Y. He defeated Brockway’s highly ranked Cody McClintock 12-4 in the finals at 160 pounds. Louie’s brother, Spencer, was second at 145.