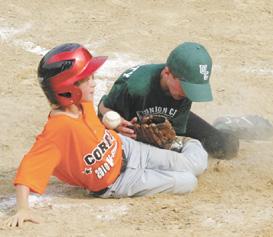 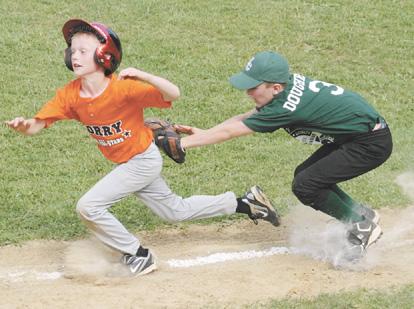 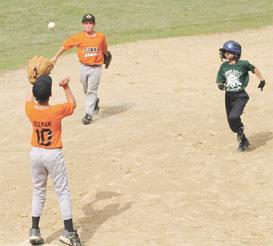 What a super start for the Corry Minor boys all-star team.

Saturday at Bracken Field, Corry scored eight runs in the first inning and coasted to a 12-2 win over Union City in four innings.

The 1-2 hitters, Austin Goodsel and Bryton Lyon, went 3 for 3 with two walks and a hit batsman, scoring runs on five of their six plate appearances.

Goodsel and Lyon scored in the first on Alex “The Big Show” Shopene’s double to left-center. Kenny Nichols had an infield single and stole second. With two outs, Joey Perry singled to center driving in two runs. Nate Labowski blooped a hit to right and Tyler Jackson walked. Goodsel singled in a run, as did Lyon, completing the big eight-run explosion.

Union City scored its two runs in the second when Devon Hopson doubled in Jason Dougherty and Nathan Soliwada.

Corry scored twice in the third. Goodsel and Lyon crossing the plate, Tyler Burlew with a long sacrifice fly to left.

In the fourth, Cameron Beeman, Michael Dietz and David Anderson walked, setting the stage for diminutive Dalton Craker’s first at bat of the contest. He singled in two runs to end it.

Burlew pitched 2 1/3 innings allowing two runs and two hits, walking none and striking out three. Goodsel finished up, walking one and fanning one, allowing three hits.

Corry’s Major boys, who lost 13-3 on Friday (no report submitted), will play tonight at 8 p.m. at Bracken Field in the loser’s bracket.