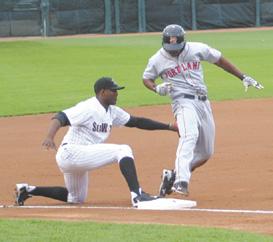 Audy Ciriaco retires Yamaico Navarro trying to stretch a double into a triple in the third. Journal photo by R.L.McCray 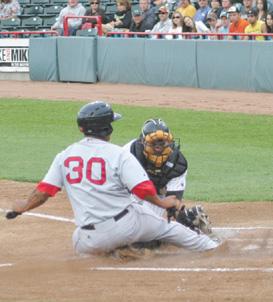 Audy Ciriaco retires Yamaico Navarro trying to stretch a double into a triple in the third. Journal photo by R.L.McCray

ERIE — After spotting Portland a three-run lead in the third, the Erie SeaWolves battled back to tie Tuesday’s game before losing in the ninth 4-3 in the opener of their six-game homestand.

Jared Gayhart walked two Sea Dog batters around a single with two outs in the top of the ninth inning. Gayhart then hit Luis Exposito on the wrist to force in the go-ahead and winning run.

The SeaWolves’ Deik Scram was 1 for 4 with a run scored in his first game for the team since an April 24 promotion to Triple-A Toledo. Scram was recalled when Wilkin Ramirez, the Eastern League’s leading home run hitter, was called up to the Mud Hens on Tuesday.

Ramirez, who briefly played for the Detroit Tigers in 2009, was sent back to Double-A for the start of the 2010 season because of a logjam of outfielders in the parent club's minor-league system.

The 24-year-old Dominican Republic native led the Eastern League with 15 homers and was tied for second in RBIs with 42.