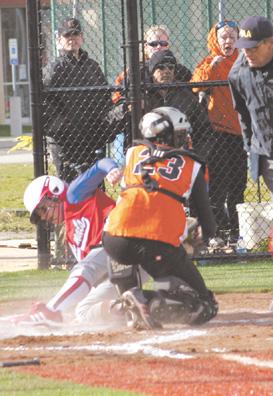 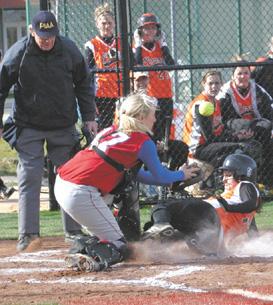 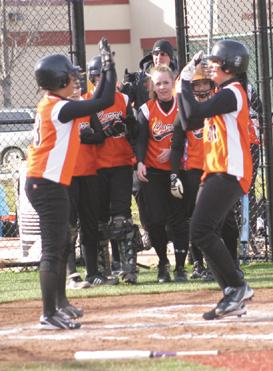 Shelby Liller celebrates with Brittany Zajac (right) after the freshman belted a two-run homer in her first varsity at bat. Corry won its first game, 9-2. Journal photo by R.L. McCray

Shelby Liller celebrates with Brittany Zajac (right) after the freshman belted a two-run homer in her first varsity at bat. Corry won its first game, 9-2. Journal photo by R.L. McCray

If the first game at Corry’s new all-weather softball field is any indication, it will soon have an appropriate name.

How about the launching pad?

The Lady Beavers, who hit five homers all of last season, belted three HRs yesterday in the first game of the season as CAHS cruised past powerful Cochranton, 9-2.

In a matchup of teams that both won their regions in 2009, the Lady Beavers broke things open with a six-run fifth inning.

The game featured three double plays, including one that was as rare as they come.

In the Cochranton fourth inning, after Shelby Proctor walked and Gretchen Herzberger popped out, the dangerous Sarah Jacobs ripped a shot to right-center field. The ball eluded the diving Shelby Liller, and right fielder Cierra Howell picked it up at the fence.

Howell hit shortstop Shana Merkle with the relay and she in turned fired a strike to the plate to gun down Proctor (see photo). Meanwhile, Jacobs came around third. Catcher Cara Baker fired to Meghan Carney for the tag and the inning-ending DP.

The play amounted to a triple, with no runs, and five assists — two each for Howell and Merkle.

Had coach Steve Skalos ever seen anything like that before.

“Yeah, but I think we were batting at the time,” he admitted. “Our defense is working out well.

“The field is really nice, but it’s different and still taking awhile getting used to,” said Skalos. “Everything is the same, the ball bounces the same.

“The games are all nerve-wracking, but getting the first win out of the way is a good way to start the season,” he said. “We relaxed a little too much on defense later in the game, we still have a ways to go.”

How about hitting three homers in one game?

“We can hit, and we faced two good pitchers today,” Skalos stated.

Merkle got the ball rolling, hitting a two-run homer in the third.

“I thought it was going fly out to the right fielder, I didn’t think it was going over the fence,” she said of her first varsity homer. “I was really nervous going into the game but I think that’s gone now.

“I like to be a leader, we try to be positive with everyone,” said Merkle, one of just three returning regulars.

Merkle also had an RBI double in the sixth and finished 3 for 4.

Freshman Brittany Zajac, in her first at bat as a varsity player, slugged a two-HR to plate Merkle. Carney connected four batters later on a two-run shot to left-center.

Alex Puckly looked good in her first start, throwing five shutout innings with six strikeouts and one walk. She held all-stater Herzberger without a hit and also went 2 for 3 with two runs scored.

For the record, Corry’s last home loss was two years ago in a non-league 3-0 setback to DuBois.

The Lady Beavers have another game tomorrow at home against Titusville, game-time at 1 p.m. The Lady Rockets are 0-1 bowing 2-1 to Fairview in their opener.