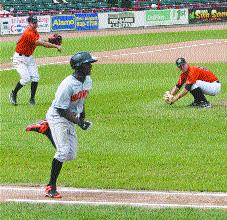 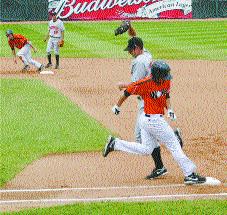 Erie’s Billy Norlin is called out at first base on a double play throw to Bowie’s Joe Mahoney in Sunday’s game. Journal photo by R.L. McCray

Erie’s Billy Norlin is called out at first base on a double play throw to Bowie’s Joe Mahoney in Sunday’s game. Journal photo by R.L. McCray

JAMESTOWN, N.Y. — With two off days looming, the Jamestown Jammers are in first place in the NYP’s Pinckney by a game and a half. The Jammers scored in bunches on Sunday at Diethrick Park, using two home runs to beat the Vermont Lakemonsters, 11-5.

Aaron Dudley hit a grand slam in the bottom of the first inning and Harold Brantley, Jr. socked a two-run home run in the fourth as the Jammers built a 7-1 lead.

Rett Varner started for the Jammers and pitched five innings of one-run ball. He threw 4 1/3 innings before a 45-minute rain delay halted play. He came out after the delay and recorded two outs to earn the victory and improve to 3-1.

Dudley went 2 for 4 with four runs batted in, Brantey 2 for 3 with three RBI.

After the all-star break, of which Jammer HR leader Marcell Ozuna and reliever Jordan Conley will play for the NL team Tuesday at Staten Island, the Jammers' next game is Wednesday at State College. They return home on Saturday to play the Auburn Doubledays.