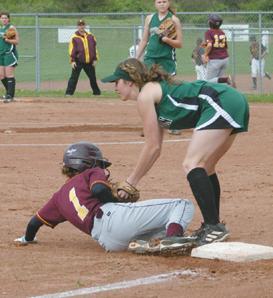 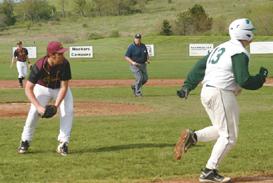 Journal photo by R.L. McCray - Pirate pitcher Austin Cramer fields a bunt and throws to first for the out.

Journal photo by R.L. McCray - Pirate pitcher Austin Cramer fields a bunt and throws to first for the out.

CLYMER, N.Y. — Brocton got the better of Clymer twice on Wednesday winning the baseball game 21-9 and taking the softball contest, 11-7.

Mitch Einink and Dan Lictus had two hits each for the Pirates, Lictus with five runs batted in.

Brad Johnson, Devon Austin and Kyle Schrantz each had three hits for Brocton.

Clymer started Austin Cramer who was relieved by Jake Wiggers, then Matt DeStevens, Denton Holthouse and Einink for the final out.

In softball, Brocton got its first win in seven starts as Clymer fell to 1-6.

Clymer’s teams play at Sherman on Friday. Next week, weather permitting, Clymer is scheduled to play every day.