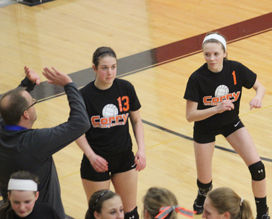 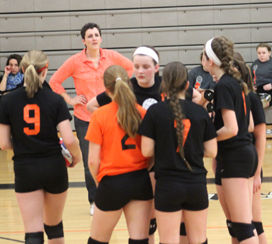 “Corry was in control early as Seneca was unable to return our serves, especially those of Riley Baker and Megan Dennis,” said coach Pat Goodsel. “Brooke Joncas and Olyvia Carr, our middle hitters, had a strong presence at the net, both while attacking and blocking. Meg Goodsel and Dennis again worked well together on the right side.

“Hope Hasbrouck, Emily Sonntag and Baker, our primary passers, provided good passes which enabled us to set up our offense,” she said. “Hasbrouck provided leadership and aggressiveness on the defensive end. Baker and Sonntag, our outside hitters, had some good kills, and continue to work on improving their approach.

“The girls work well together as a team and work hard in practice,” said coach Goodsel.

“We also had strong serving, in particular from Maddi Vona and Morgan Ahl,” said Goodsel. “Kiara Keener played well, with several passes and kills. Rylyn Bailey, Laurel Cooney and Vona were setters. They played well both in getting to the second ball and in putting up good sets for their hitters.

“Indya Berkhous and Krystal Kinney were strong all around, in good serving, hitting, and passing,” she said. “Alexa Yoder and Hannah Poston contributed several good passes.

“The girls are getting more comfortable in their roles, knowing where to position themselves in various situations and who is going to play what ball, and they are able to execute their skills better,” Goodsel noted.

The next match is Monday at Girard. Corry is home on Tuesday versus Harbor Creek.