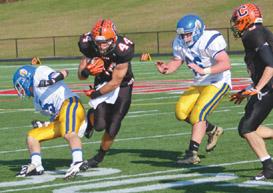 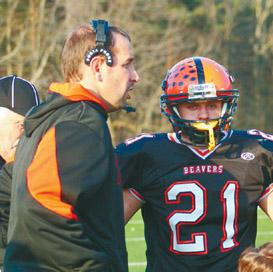 Nate Smith (5) throws against the Trojans in the District 10 playoff game in Edinboro.

Nate Smith (5) throws against the Trojans in the District 10 playoff game in Edinboro.

The numbers speak for themselves.

The 23 wins in three years is the second most at CAHS to 24.

This past season, when Corry was 8-3 and co-champion of Region 4 with Northwestern, the high-powered offense was 47 yards shy of 4,000 yards.

“I’ve never had a more improved team in my 11 years here,” coach Homer DeLattre said at this week’s banquet. “A lot of people thought we’d be a .500 team.

“I have coaches calling me saying they want to be like us, we have a model program,” he claimed.

The biggest shoes to fill will be those of record-setting running back Matt Cragg.

Cragg was the Region 4 “player of the year” and was a first-team pick at running back.

Randy Clapp had a team-best three interceptions. “He’s a model for my kids,” said coach DeLattre.

Jacob Seely, who had 10 pancake blocks and was a three-year starter, was a first-team pick on the offensive line.

He was a unanimous pick, said DeLattre, which is nearly unheard of.

Shane Taubert was a four-year lettermen, playing almost every position on the field. He had 90 tackles, 11 for losses, and made second team on defense.

Patrick Brown was the hardest working player of the field, according to DeLattre. He caught 16 passes, five for touchdowns. He was on the second team.

Josh Daniels also made second team on offense and was solid on both sides of the ball.

Tyler Engle, also a four-year letter winner, made first team at defensive line and second team as tight end. He made 62 tackles, 16 for losses, and had 230 yards receiving — plus six TDs.

The coach termed Brandon McCray as the most improved player in the program. “He had the play of the year, the interception return for a touchdown at Northwestern,” said DeLattre.

Kevin Roth made 50 tackles at defensive back, while Dylan Silvis was “as tough as they come” according to DeLattre.

And then there’s Jordan Sabat. “He’s been with us since the fourth grade as a manager, he’s a big part of us,” DeLattre pointed out,

Junior Ryan Morris was a first-team all-region pick at linebacker. He led the team with 128 tackles, second highest total in 11 years.

Nate Smith made the second team at quarterback. He passed for over 1,000 yards fro the second season and has more than 2,500 yards passing in two years.

DeLattre closed the banquet by saying Corry has “the best booster club anywhere.”