Corry’s Sammy Lehner scores a run in the top of the fifth. Journal photo by R.L. McCray 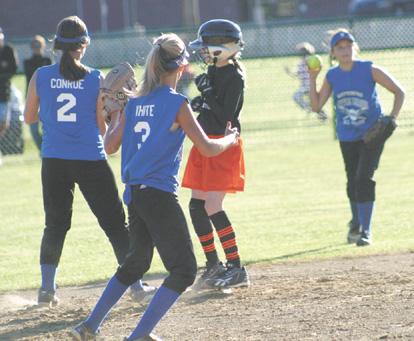 Corry’s Rachel Dingfelder is surrounded by Wattsburg players after her RBI double Tuesday night in the fifth inning of girls Major all-star action in Columbus. Journal photo by R.L. McCray

Wattsburg’s Tori Barthelmes arrives at second base after her two-run double in the fifth inning. Journal photo by R.L. McCray

Corry’s Sammy Lehner scores a run in the top of the fifth. Journal photo by R.L. McCray

Corry’s Rachel Dingfelder is surrounded by Wattsburg players after her RBI double Tuesday night in the fifth inning of girls Major all-star action in Columbus. Journal photo by R.L. McCray

Wattsburg’s Tori Barthelmes arrives at second base after her two-run double in the fifth inning. Journal photo by R.L. McCray

No one saw this coming.

Corry’s Major girls softball team have a long history of success in the District 3 Tournament.

Tuesday night at home in Columbus, the local girls were stunned by Wattsburg 7-4 in opening-round action.

Wattsburg, who reportedly beat Corry last in 1992, scored five runs in the third inning and held off Corry who got within 5-4 in the fifth.

“What made this loss especially disappointing is the strength of this year's team is our hitting, but it went south against a very hitable pitcher,” reported coach Dan Crawford. “At every level of Corry softball we prepare the girls for the faster pitching and it seems when we face slow pitching, we aren't able to make the adjustment. “That was the case,” he claimed. “While we had a few good hits, especially the triple Brooke Bugbee launched, we were too anxious and kept popping it up.”

Corry took the lead in the first inning when Sammy Lehner and Jill Williams reached on back-to-back errors, with Lehner scoring on a wild pitch. Williams stole second and third but a strikeout and ground out would leave her stranded.

Bugbee smashed a long triple in the second, but a pinch runner was tagged out at home. Cayla Suchar then hit the next pitch to left center for a single but she did not score.

Katelyn Sipes came in to pitch in the third. Three walks and two outs had the bases loaded. Another base-on-balls forced in a run tying the game at 1. J.Will hit a single to center to score two runs to make it 3-1 and Tori Barthelmes had the first of her two big two-out hits making it 5-1.

Corry plated three runs in the fifth after Ashleigh Troyer reached on a two-base error and scored on an RBI double by Rachel Dingfelder. After a ground out, Lehner singled to center scoring Dingfelder and she scored on a Merkle single making it 5-4.

But that was as close as it would get as Brooklyn Goodsel popped out to the pitcher.

Wattsburg scored two more runs on a two-out double by Barthelmes for a 7-4 lead.

Corry went down 1-2-3 and the huge upset became reality.

“The good news is our pitching and defense were good enough to win, and that was our biggest worry heading into the tournament,” said Crawford. “Cayla Suchar, Samantha Lehner and Rachel Dingfelder hit the ball hard, and defensively Dingfelder and catcher Jill Williams were solid. Not one ball got by Jill and they never attempted to test her arm.

“We told the girls their backs are against the wall and they are now in a single-elimination tournament,” he claimed. “But they can still pull it off.

“It will take five games to win districts, and if the girls focus one game at a time, before they know it they will be in the finals,” said Crawford.