You have permission to edit this article.
Edit
Welcome, Guest
Home
News
Obituaries
Hometown
Sports
1 of 3 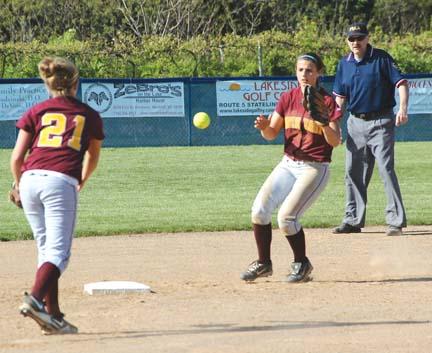 photo by Leslee Gorzynski - Shortstop Rachel Prather throws to second baseman Kayla Rizzo for an out. 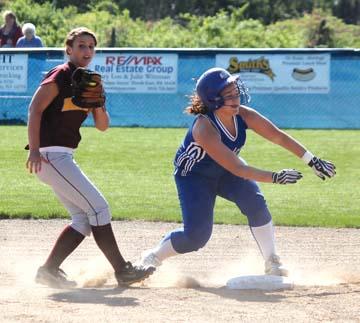 photo by Leslee Gorzynski - A Seneca Bobcats baserunner tries to get back to second base but North East’s Kayla Rizzo tagged her out before she could reach the base.

photo by Leslee Gorzynski - Shortstop Rachel Prather throws to second baseman Kayla Rizzo for an out.

photo by Leslee Gorzynski - A Seneca Bobcats baserunner tries to get back to second base but North East’s Kayla Rizzo tagged her out before she could reach the base.

After losing a heart-breaking 6-5 game to second-place Iroquois, the North East Lady Pickers softball team responded by winning their next three games, outscoring their opponents by a 31-1 margin.

The first game came at home against the Villa Lady Victors. North East came out on top by an 11-1 score. The Pickers quickly jumped to a 5-0 lead by scoring 5 runs in the first inning. Tori Prather, Annie Hecht, Kaitlyn Burns and Danielle Barnes all had hits in the inning.

Two more runs came in the second inning on hits by Rachel Prather, Kayla Rizzo and Hecht. Villa scored its only run in the fourth on 2 hits and a walk.

North East tallied 3 in the fifth on hits by Barnes, Kendra Alcorn and Rachel Prather. A run in the sixth ended the game at 11-1 when Burns scored on a double by Barnes.

Tori Prather had 3 hits and Barnes had 2 doubles and a triple. Rachel Miller pitched a five-hitter with 6 strikeouts.

The Pickers then defeated the Eisenhower Lady Knights as pitchers Miller shut them out and North East scored 10 runs in the second inning. Burns scored on a hit by Victoria Alcorn. They added 4 more in the third on 2 walks and hits by Tori Prather, Hecht and Rizzo. They made it 10-0 with a run in the sixth with Burns driving in Summer Maas. Miller allowed only 3 hits and struck out 5.

The General McLane Lady Lancers came to town and were also beaten by the Pickers, 10-0. Miller was outstanding as she pitched her second consecutive shutout. She gave up only 4 hits and struck out 4. The Lady Pickers scored 3 in the third on hits by Rachel Prather, Bre Klenz, Tori Prather, Rizzo and Hecht.

Two more runs came in the fourth on hits by the Prather sisters.

North East added 3 in the fifth on hits by Burns, Hecht and Kendra Alcorn. The game ended in the sixth inning when the Pickers scored two more runs on an error, a walk and hits by Tori Prather and Hecht. The Prather sisters and Hecht had 3 hits apiece.

The team learned Thursday that they have earned a play-in game to qualify for the play-offs. They will take on the Jamestown Muskies at Allegheny College this Saturday at noon. The last time the Lady Pickers earned a trip to the playoffs was 1980 with a District 10 championship title. That team played at Shppensburg and took 7th at States.