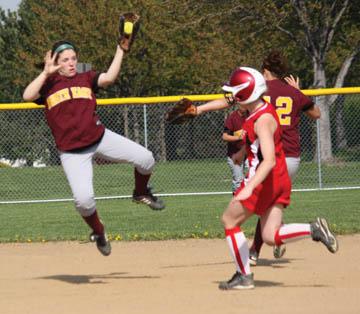 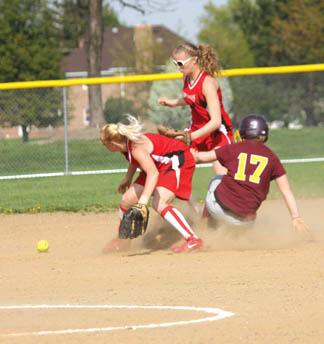 The Lady Pickers hosted the General McLane Lancers on May 5 for a double header after the first meeting of the season was postponed due to bad weather.

The two evenly-matched teams won one game apiece by identical scores of 6-5. Both games went into extra innings.

G.M. won the first game in 9 innings with North Esat taking the night cap in 8 innings. In the first game the Pickers to a 2-0 lead in the second inning on four walks and a single by Victoria Alcorn.

The Lady Lancers scored 4 runs in the fourth on 4 hits to take a 4-2 lead and North East tied it with 2 runs in the fifth on 3 hits by Annie Hecht, Kaitlyn Burns and Alcorn. G.M. scored a run in the sixth on a single and triple. Down by a run in the seventh, Picker pitcher Rachel Miller scored to send the game into extra innings. McLane won it in the ninth when their leadoff hitter singled and later scored on a two-out error.

In the second game, after a scoreless two innings North East took a 1-0 lead in the third when pitcher Tori Prather led off with a walk and scored on hits by Burns and Alex Gregory. The Pickers made it 2-0 in the fourth when Kayla Rizzo scored on a hit by Alcorn.

G.M. scored 3 runs in the sixth on a walk and 3 hits. North East tied it in the bottom of the sixth when pinch runner Kendra Alcorn scored after hits by Rizzo and Prather. The Lancers scored twice in the eighth on a triple, walk and a couple of errors.

Down by 2 runs in their final at-bat, the Lady Pickders rallied for 3 runs on a hit by Miller, a walk, error, and a single by Victoria Alcorn to drive in the winning run. It was a thrilling doubleheader as both teams won on the final at-bat.

Undefeated Fairview came to town Friday, May 6 and the Lady pickers gave the Lady Tigers a battle before falling 6-2.

Fairview took a 3-2 lead in the fifth on a home run. They scored 3 runs in the sixth to take a 6-2 lead on a walk and 3 hits. Down 6-2, North East tried to rally in the sixth when 2 hits and a walk loaded the bases with no outs. However, Fairview’s pitcher was able to get out of the inning without a run scored.