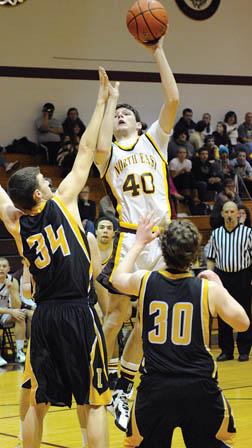 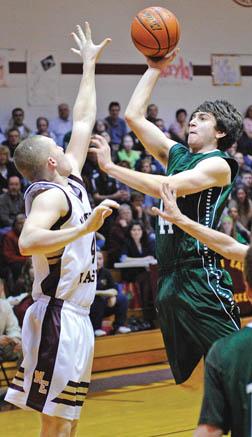 North East, firmly lodged in second place following its 41-24 win over Fairview Monday, will wrap up the regular season Friday at Northwestern.

Playoff-hungry Northwestern is an extremely formidable opponent on their own floor, having administered Mercyhurst Prep’s only league loss of the year going into Tuesday’s games. “It’s very tough (to play at Northwestern). Last year it was a 30-28 game out there. We shot horrendously. I know they’re pretty good,” said North East coach Tom Pyle.

Pyle had plenty of accolades to hand out following his team’s victory at Fairview, especially as it came just three days after Mercyhurst Prep handed North East a major 42-26 setback.

“One of the things that I was most pleased about was, first of all, our defense, especially in the fourth quarter; we only gave up two points.” Pyle also praised his post players for greater movement on offense, setting screens and creating shots for other players.

“We only got a total of nine points between the two post players, but that made a difference in the second half.”

Cory Bailey scored a game-high 21 points, including six points in both the third and fourth quarters.

“In my opinion, Cory is the best player in our region. I don’t think he played that way Friday night; on most nights, he does play that way. I think he finally took it personal,” Pyle said. “He made plays (Monday) night; he didn’t make them Friday night, but (Monday) night he did, and we hope that continues,” Pyle said.

“He played a game like I expected him to play in a situation when we needed him the most.”

North East held slim 7-6 and 15-13 leads after the first two periods, then crafted a 15-9 edge in the third period to forge a 30-22 advantage going into the final frame. The Tigers were limited to two foul shots, while North East added 11 points, in the last period.

“After the way we played on Friday night to come back and play as well as we did on Monday night, that says a lot about our seniors,” Pyle said.

Last Friday, a confident Mercyhurst Prep — buoyed by its earlier double overtime win over North East – handed the Grapepickers a decisive 42-26 setback that dropped North East into second place, a game behind the Lakers, entering the final week of play.

“We gave up only 42 points, and if you only give up 42 points in a varsity game you should be in the game,” Pyle said.

But North East wasn’t for long.

In a playoff atmosphere in front of over 1,100 fans, North East hung with Mercyhurst for only the first three minutes. Tyler Johnson’s free throw gave North East its only lead, 5-4, before an Alex Borges dunk punctuated a 10-0 run by Mercyhurst Prep run that closed out the opening period.

Against a swarming defense, North East was unable to score more than eight points in each of the remaining periods, while Mercyhurst Prep put in 10, 8 and 10, respectively, in the final frames. “They guarded the heck out of us,” Pyle said.

The veteran coach had an early sense that all was not well for the Pickers, who had been undefeated on their own floor this season.

“I thought their kids, at the very beginning of the game, were relaxed, very focused and very self assured, and I think they really thought they were just going to come in here and kick our butts,” Pyle said.

“On the other hand, I looked at our kids and our kids were just not quite sure what was going to happen. I think if you take a look at 11 points (North East’s point total) at the half of a varsity game, I think that’s evidence of our kids not really knowing or having the confidence.”

A three-pointer by Scott Wagner just before the buzzer gave Mercyhurst Prep a commanding 24-11 edge at the half.

The Pickers shot just 26 percent (8-of-31) from the field, sank 10-of-15 shots from the line and did not hit any 3-pointers. Johnson led the team with nine points.

Meanwhile, the Lakers blistered the nets at a 61 percent clip (17-of-28), deposited 6-of-11 foul shots and hit a pair of 3-pointers. Carl Anderson and Casey Shelton, who each had six points in the breakaway first period, led the Lakers with 11 and 10 points, respectively.

Despite adjustments, North East was unable to chip away at the deficit. A Rocky Owens foul shot early in the second quarter cut the deficit to nine, 19-10. A three-point play by Josh Kitchen trimmed the shortfall to 11 points, 35-24, with 3:20 left in the fourth period.

“We tried a bunch of different sets, put some new sets in, hoping that we could make an adjustment,” Pyle said. “I thought we gave the effort, I thought we had some great opportunities. We stopped them, got some rebounds, got some turnovers — but at the other end we couldn’t buy a basket, and that killed us, especially in the first half.”

Even with the loss, the game was a learning experience. “It was a playoff atmosphere – our kids really needed that. Our community was wonderful (tonight), how could you ask for anything more,” Pyle said.

“Right now they’re better than us, but we’ve got a couple weeks to catch up to them,” Pyle said after the game.