Anné Lewis powers her way up a hill on the challenging course at states. -photo courtesy of Cliff Smathers 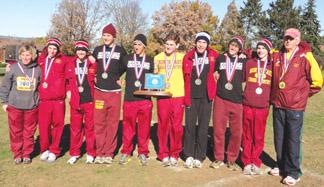 Anné Lewis powers her way up a hill on the challenging course at states. -photo courtesy of Cliff Smathers

Smathers led the way for the team and finished in fifth place overall with a time of 16:30. This outstanding performance also earned him individual All-State honors for an impressive second year in a row. Smathers was the top finisher at the state meet from District 10.

Finishing in 48th place, Gary Olson was next in for the Pickers and the first freshman in the state to cross the finish line with an impressive time of 17:33.

Running tough, Doug Drab was the third runner for the Pickers, finishing in 108th place with a time of 18:00, dropping almost a minute from his last year’s state effort.

Jacob Miller, in his first state meet, finished next in 122nd place with Ben McAuley and Tyler Giesen right behind. Freshman, Ryan Anderson, who has been battling a hip injury, also ran solid races to finish out the top seven for North East.

Congratulations also to North East only girls’ team representative at the PIAA State Meet, Anné Lewis, who finished 36th at the state meet with a time of 20:39 and had a spectacular season.