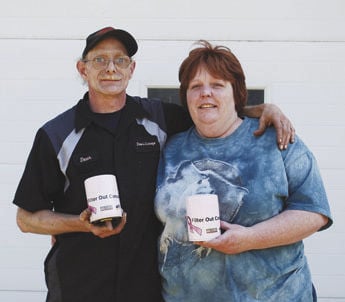 Dean Stroup is on a mission to help others. He collects money at his garage at 13421 Lovell Road to help area residents afflicted with cancer. Stroup, left, and his wife, Jenny, say the money collected in the coin collection cans will stay in the community. 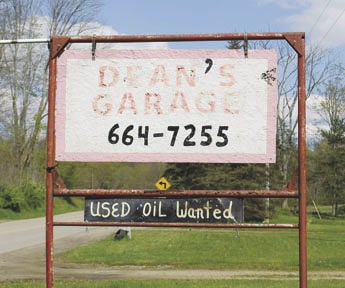 Dean Stroup is on a mission to help others. He collects money at his garage at 13421 Lovell Road to help area residents afflicted with cancer. Stroup, left, and his wife, Jenny, say the money collected in the coin collection cans will stay in the community.

CONCORD TOWNSHIP — A white sign painted with pink letters is rarely displayed at many auto shops, but one is proudly hung outside of Dean’s Garage at 13421 Lovell Road.

Dean Stroup and his wife, Jenny, of Spartansburg, know all too well the toll cancer can take on a person’s body.

In addition to working on cars and trucks, Dean Stroup is also interested in helping people.

That is why he has coin cans in his office — they are to help raise funds for local cancer patients.

“The coins are being collected to help cancer patients in the community,” he said.

Jenny Stroup, the secretary of Dean’s Garage, said her mother passed away 22 years ago from cancer.

She said although the cancer was caught early on, it surrounded her mother’s lungs and quickly moved to her brain as it was an aggressive, fast-growing type of cancer.

“She had this cough that wouldn’t go away and they thought it was bronchitis,” Jenny Stroup said.

When they diagnosed her mother with cancer, doctors gave her three to six months to live.

But then, the family found a doctor who did research and said she could give her mother two additional years.

“Guess what,” she said. “She actually got those two years.”

Dean Stroup said his grandfather was one of the men in his life who encouraged his interest in auto repair.

“When I was about 12 years old I was helping my dad, uncle and grandfather working on oil rigs in Pleasantville,” he said.

He worked on cars and off-road vehicles with his dad and uncle at about the same age.

“From then on, it was all automotive and oil related,” Dean Stroup said.

He officially began his career working for a Chevrolet repair shop in Titusville after graduating from Titusville High School.

In 2014, after Slike's closed, he decided to open his own business.

Dean Stroup says there is one thing that sets him apart from other repair shops.

“I really enjoy helping people,” he said. “I take the time to explain the problem to the customer and take the damaged part out to show what was wrong with it, so when they’re happy, I’m happy.”

The garage is a family-run business.

“My son, Nathan Gunn, is 22," Jenny Stroup joked, "He helps Dean around the garage, and our daughter, Olivia Stroup, is 16, she helps organize paperwork, and I guess I’m the secretary, but everyone just calls me the boss.”

Cancer may have taken their loved ones, but it has given the Stroups a new  awareness and hasn’t dimmed their sense of humor.