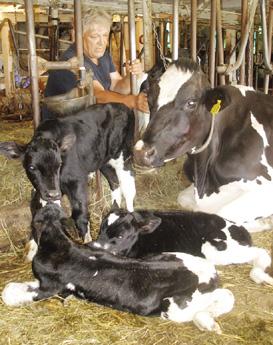 George Savko of Lottsville looks over the triplet heifers that were born Tuesday morning at his family’s dairy farm on Route 957. Mom, a 6-year-old Holstein, takes a well-deserved break. Journal photo by Stephen Sears 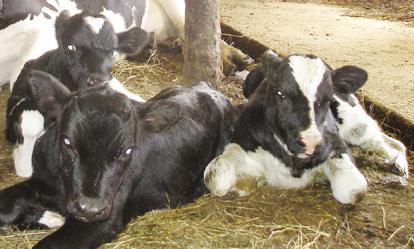 Triplet births are uncommon for Holsteins. Having three female calves, or heifers, is rarer still. Journal photo by Stephen Sears

George Savko of Lottsville looks over the triplet heifers that were born Tuesday morning at his family’s dairy farm on Route 957. Mom, a 6-year-old Holstein, takes a well-deserved break. Journal photo by Stephen Sears

Triplet births are uncommon for Holsteins. Having three female calves, or heifers, is rarer still. Journal photo by Stephen Sears

LOTTSVILLE — George Savko thought his pregnant 6-year-old cow — known only as No. 154 — might be carrying twins.

“I told my sister that I wouldn’t be surprised,” said Savko, who helps run the family’s 300-acre dairy farm on Route 957, just east of Lottsville. “She was carrying pretty low.”

Savko and his sister, Janet, a longtime first-grade teacher in the Youngsville School District who also works the farm, and their mother, Florence, were in for a bigger surprise.

The 1,150-pound Holstein delivered not one, not two, but three seemingly healthy calves early Tuesday morning.

To top it off, the newborns were all female calves, known as heifers, which makes the triple births even rarer still.

A young female calf from birth is called a heifer until she has had a calf of her own.

“You look at one and then there are three — yikes!” said Savko, whose family has owned the farm since the early 1950s. “They’re little cuties.”

The Savkos had never experienced triplet births at their farm, which now has about 100 head of cattle. Not many dairy farmers have, said George Wilcox, the Penn State Cooperative Extension’s dairy agent based at Penn State Behrend.

“I’ve been involved in this job for nearly four decades, and I can remember there being only one other set — in Erie County,” Wilcox said. “To have triplets is rare, to have them born alive is even rarer, and to have them born healthy is even more exciting.”

Savko estimates each calf weighs about 50 pounds, which is quite a bit smaller than the typical birth weight of about 90 pounds. Still, they appeared to be in good health, he said.

Wilcox, who has not seen the animals, said the Savkos were fortunate to have their cow deliver three heifers.

“But three heifers can be raised, bred and become productive,” Wilcox said.

Savko knew No. 154 was nearing her 9-month term Monday evening.

“She wouldn’t come into the barn,” he said. “She wanted no part of it like she usually does.”

When Savko hopped on his four-wheeler to check his animals at about 5 a.m. Tuesday, he found the cow lying in a small pasture near his barn with a black calf. He scooped up the newborn heifer and took her to the barn.

When he returned, his intuition about twins had been confirmed. Another newborn heifer he hadn’t noticed before was nuzzling up to her mother.

The mother cow soon headed to the barn leaving the second calf behind. He took the other calf to the barn and then rode his four-wheeler to tend to other cows in the pasture.

In the barn, however, Janet Savko noticed something. “A foot was coming out,” George Savko said.

Janet Savko caught the third — and final — calf as it was born.

“Twins — that’s fantastic. But having a third heifer, that’s a shocker,” George Savko said. “She turned into a Xerox machine.”

Wilcox said it would take a little time for the mother cow to recuperate.

The cow, who was bred by an 1,800-pound bull named Gus that recently was sold, deserves credit, Savko said.