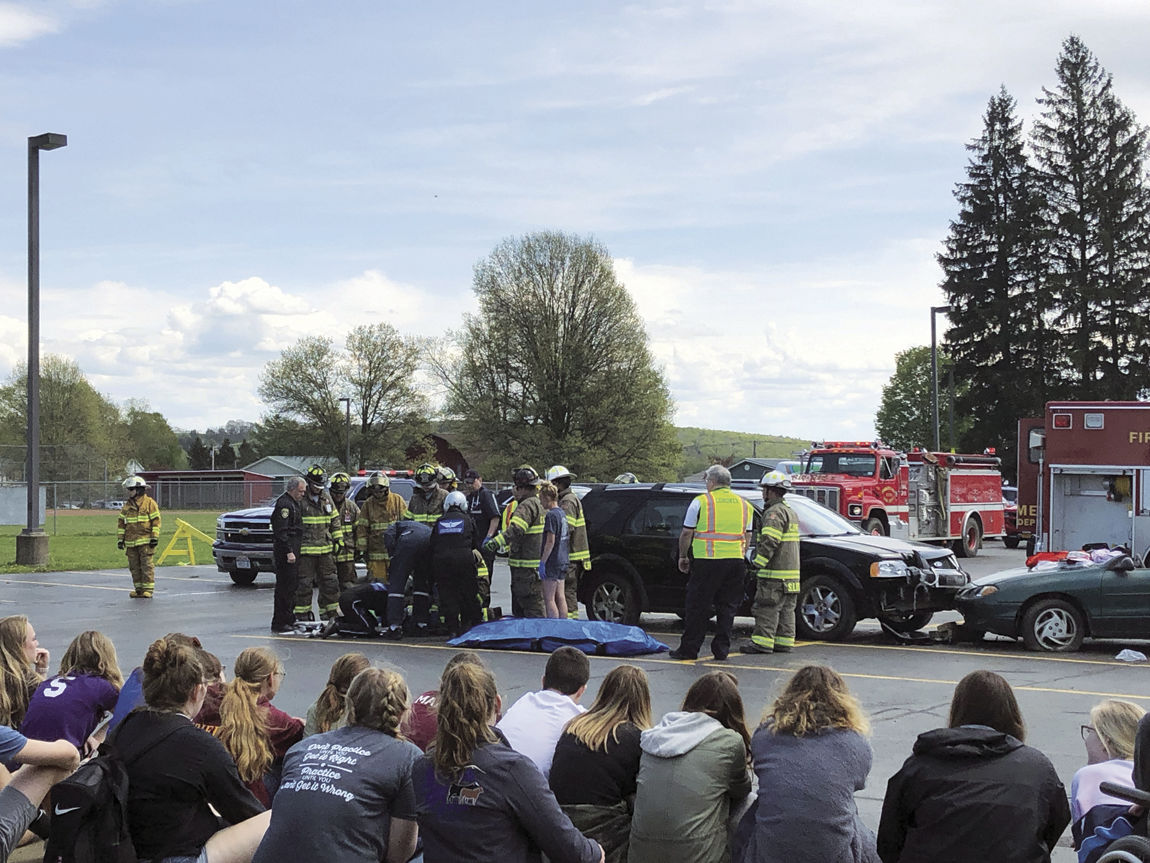 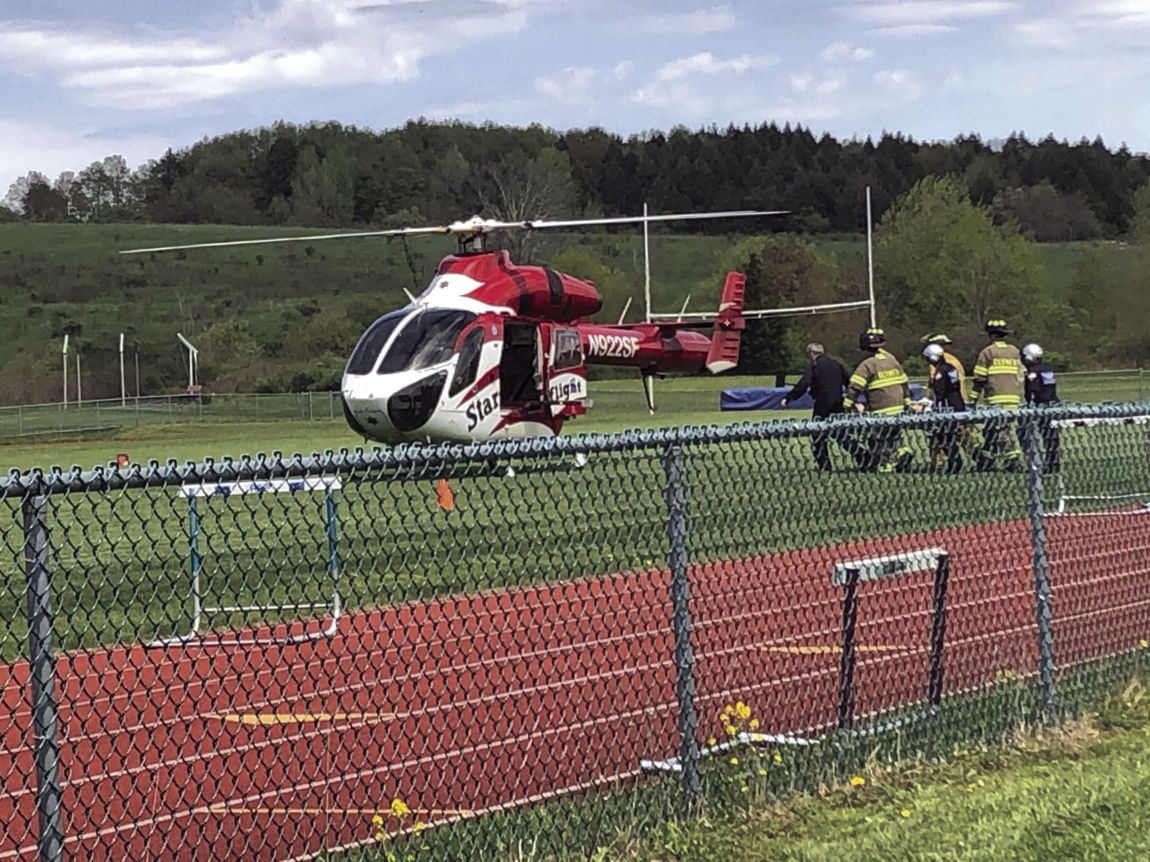 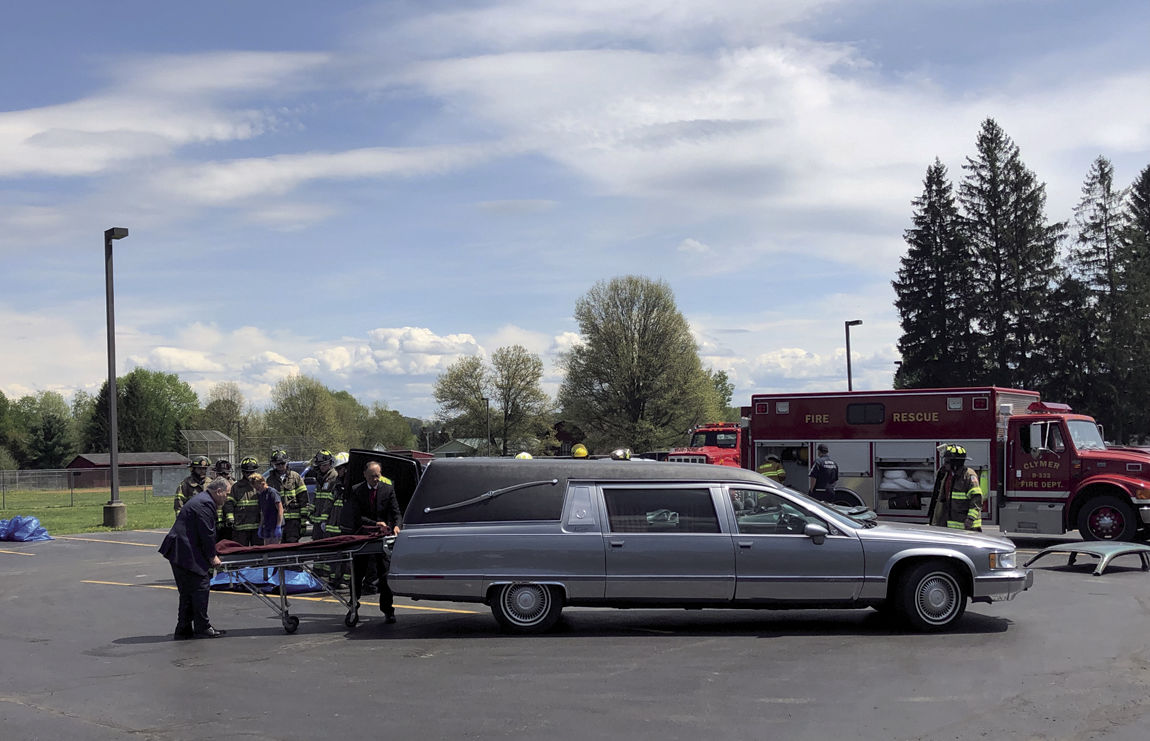 During a staged DUI accident, a hearse arrives to the Clymer Central School parking lot to take the “deceased” student to Spitzer Funeral Home. 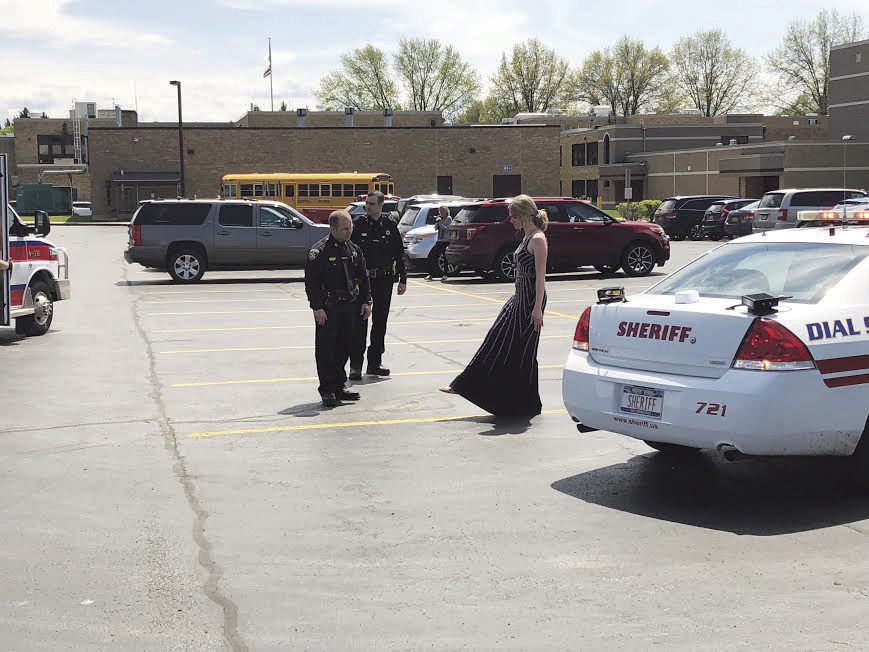 The mock accident left one girl arrested, one girl life-flighted and another pronounced dead on the scene. While fake, the presentation left students emotional.

Students gathered into the Clymer Central School gym Wednesday to watch a presentation managed by Kathleen Whitmore, adviser of the Students Against Destructive Decisions club, and performed by the SADD students.

Before the event began, Whitmore and Abigail Heslink, president of SADD, said a few words.

“We need to be serious,” Whitmore said. “I know that this is a mock accident but this could happen to anyone at any time, so please take it seriously.”

“With prom coming up this weekend, we want you all to be safe and responsible, especially on the roads. We hope that you think twice about the decisions you make and take every second of this presentation very seriously.”

From firefighters to an emergency ambulance and paramedics, multiple volunteers worked with the SADD club to bring together the presentation. Others who volunteered included the Chautauqua County Police Department, Clymer Volunteer Fire Department, Spitzer Funeral Home and Judge Laurie Beckerink.

Starflight Regional Medevac was also part of the event, but officials have stated this would be the last time they would participate in a mock accident.

This year’s presentation began with a small skit. Two groups of girls were getting ready for prom, one group underage drinking and the other not. After the skit, students were directed outside where they saw a mock head-on collision between two vehicles. Within the cars, SADD members displayed fake, bloody injuries, one of the girls even pronounced dead by officers and firefighters once they arrived onto the scene.

Students sat on the sidewalk and bleachers, watching firefighters demonstrate the use of the jaws of life. The Clymer Volunteer Fire Department ambulance and paramedics that arrived also showed their procedures. Amid the commotion of firefighters, police and paramedics, a helicopter arrived on the scene. It landed on the football field, and a team of medics raced off of it to load one of the “critically injured” girls onto the helicopter.

“If it just helps one, it would all be worth it,” Whitmore said.

Students piled back into the gymnasium to watch Heslink, the student who played the drunk driver, stand in front of Beckerink to hear the consequences of her actions, including up to seven years in prison.

The presentation ended with a mock funeral for the girl who died and a few closing words from Chautauqua County Sheriff Jim Quattrone.

“I watched the crowd as the scene was unravelling out in the parking lot, and I didn’t see anyone joking around. To see that you were taking this serious, I just ask that you keep this in mind in the future: What could be the consequence of a bad choice,” Quattrone stated. “So often, it’s not bad people who are drinking and driving. It’s people who are making bad choices, and there are ways to prevent this. So, keep this in mind.”

After the stage curtain closed, many of the SADD members walked off of the stage in tears.

“I just hope students get that the decisions they make can be dangerous and they have consequences. Everyone thinks that these are things that happen in movies and stuff, but it’s real life,” said Emily Woods, a sophomore.