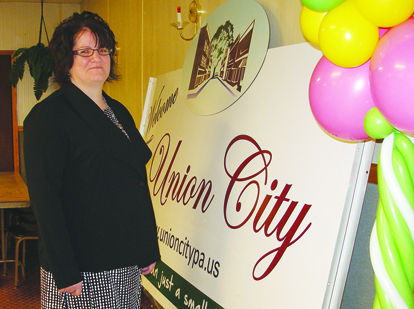 Sherri Huntley, president of the Union City Downtown Development Committee, displays one of five welcome signs that soon will be erected along major highways leading into Union City. 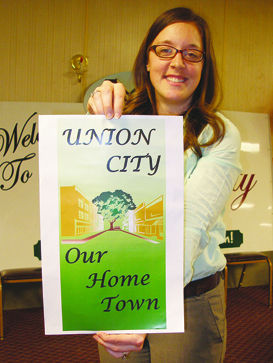 Tara Lineman, secretary of the Union City Downtown Development Committee, shows off the design for banners that will be placed on lampposts in downtown Union City later this year.

Colorful banners will be placed on lampposts in the borough’s downtown business corridor.

The borough building and the Union City Historical Museum have new energy-efficient windows.

Sixty-nine flower planters located from the borough building on South Main Street to Film Fest Video on North Main Street soon will be filled with flowers and greenery.

Since its inception a few years ago, the Union City Downtown Development Committee has worked to support its mission of trying to stimulate the borough’s downtown business climate and foster a sense of community pride.

To help accomplish that goal, the committee sought input from merchants, elected officials, organization and community leaders, and concerned citizens at a gathering Monday evening at the Union City Moose lodge. Committee members outlined past accomplishments and soon-to-be-initiated projects.

The focus, however, was to brainstorm fresh ideas and establish a five-year plan to further enhance the downtown.

“This is a great little town right now,” committee Vice President Mark Webb said. “We can make it an even better town. Together we can make it happen.”

To date, the committee has been awarded about $60,000 in grants from entities such as the Erie County Gaming Revenue Authority, the Union City Community Foundation and the Erie County Greenways Program.

The grants have financed:

• Thirteen windows for the borough building and the museum, as well as a window for a local restaurant.

• The Union City in Bloom project, which purchased the flower planters.

• The committee’s Community Day, held in Hogan’s Alley after the annual Homecoming Parade.

• The committee’s Small Business Saturday and Christmas on Main Street events and the “buy local campaign.”

The money also is earmarked to construct a community pavilion in Hogan’s Alley. The committee is partnering with the Union City Lions Club to build the pavilion and landscape the area to showcase French Creek. The McLane Church also is lending its support.

On Monday, several people said drawing attention to French Creek could be a major draw for the borough.

Carl Kallgren of Union City suggested making the creek a focal point by developing its banks and the water’s natural resource. That would make borough businesses more accessible to kayakers who use the water.

“There might be a million and one regulations, but it’s not insurmountable,” Kallgren said.

Dave Robinson, executive director of the Union City Family Support Center, pitched the idea of holding a farmers market in the municipal parking lot, which borders the creek behind the support center.

“This could draw people into town. We don’t have anything like it,” Robinson said. “This would expose people to the river without getting into all the regulatory issues.”

“It’s the biggest single mouthpiece we have to talk to each other,” Smith said. “Encourage everybody to use the page to solicit their activities. A lot of people are there — and it’s free.”

Additional ideas included getting more young people involved, developing the former True Temper site on Bridge Street and creating a downtown attraction such as the giant wooden chair that formerly sat in the small park in the northwest intersection of West High and South Main streets.

“We heard a lot of ideas of what the town could be like with the cooperation of local business owners,” she said.