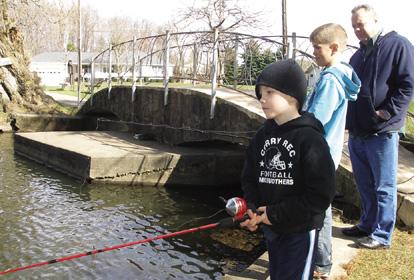 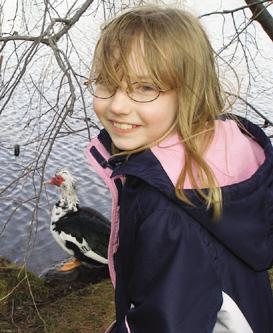 Maddie Stine cautiously crept down the grassy bank close to the chilly water of Alice Lake at Mead Park.

A Muscovy duck perched perfectly still on a rock at the water’s edge, unconcerned that the 9-year-old was little more than two wing-spans away.

“It’s really nice here,” said Maddie, who was visiting the park with her mother, Paula Stine of Corry. “You can look at the ducks, see nature and play on the playground.”

Mead Park, the 48-acre tract of land on Mead Avenue that many nature-lovers like Maddie believe is Corry’s crown jewel, slowly is coming to life after a long, cold winter.

“We survived the winter a lot better than we did last year,” said park Manager Bill Sibble, who also is a member of the nonprofit Mead Park Association that maintains the city-owned park. “There are not near as many tree branches down.”

Dave Roth, who was park manager for nearly two decades before Sibble took over in January 2008, and Sibble have been busy sprucing up the park for the new season.

“We’ve been raking leaves, painting the grills, repairing tables, and getting the restrooms ready,” Sibble said. “We’ll spend the rest of the month getting ready to open.”

Park visitors already are playing basketball, walking their dogs, playing softball and even fishing at the park, which stays open year-round. Motorists, however, will have to wait a few weeks before the dirt roads leading to picnic areas within the park are open for traffic.

“At the end of April we’ll take the chains down,” Sibble said.

Mead Park receives an annual contribution from the city, but money raised from lodge and pavilion rentals helps keep the park afloat financially. People rent picnic areas for family gatherings, company picnics, birthday parties and other functions, but, so far, reservations are coming in slowly this season. The stagnant economy might be partially to blame for sluggish advance sales, Sibble said.

Still, it would be hard to beat the prices at Mead Park, he said.

All-day rentals of the park’s two lodges cost $55 on weekends (Friday-Sunday) and $35 on weekdays (Monday-Thursday).

Renting one of the park’s three large picnic pavilions for a day costs $40 on weekends and $35 on weekdays.

The remaining smaller pavilions scattered throughout the park cost $20 on weekends and $15 on weekdays.

The cost for renting a pavilion is cut in half for functions that involves youth groups.

The park’s amphitheater may be rented for the day for $20.

“There is really no place around that is cheaper,” Sibble said. “We should be asking more but Mr. (Glenn) Mead, who donated the park to the city wanted to keep it affordable for the community.”