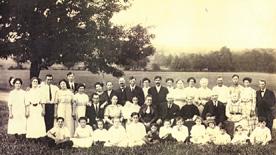 Ninety-seven members of the Akam family gathered at the home of Randy and Amy Marrs Sunday for the 100th annual Akam family reunion. Journal photo by Andy Kerstetter

Ninety-seven members of the Akam family gathered at the home of Randy and Amy Marrs Sunday for the 100th annual Akam family reunion. Journal photo by Andy Kerstetter

Family is an integral aspect of small-town life in America, and the Corry area is no different.

Traditionally, many local families have established businesses in the area and left lasting legacies for their children.

But one family has lasted longer than most, and left its lasting mark on the area.

The 100th annual Akam family reunion was held Sunday at the home of Randy and Amy Marrs on Route 957 just past Columbus.

There were 97 family members in attendance, all of them descended from John Akam and his wife, Ann Stoddard, who came to the United States from England in 1827.

John came to live in Erie County at the age of 11. When he was older, he became the proprietor of a hotel in Columbus, and later he ran a steamboat on Lake Chautauqua, N.Y., for two years.

Eventually he came into ownership of a grocery store in Corry.

Beginning with one dollar in cash, he built up a comfortable fortune, which he left for posterity.

And the rest is history.

Sunday’s celebration was a time for John Akam’s descendants to celebrate together, and also for them to remember their heritage on that special day.

There was a cotton candy vendor, manned by a friend of the family, along with horseshoes, an auction and bountiful food.

Along with food and games and other activities, a wall of pictures was assembled, which displayed photos from years past, along with information on other Akam ancestors.

Family members have also archived as many photos and pieces of information as they could in a large scrapbook.

For the Akam family, their heritage and history is just as important as the present day.

Next year’s reunion is planned to be held at the same location, the home of Randy and Amy Marrs.