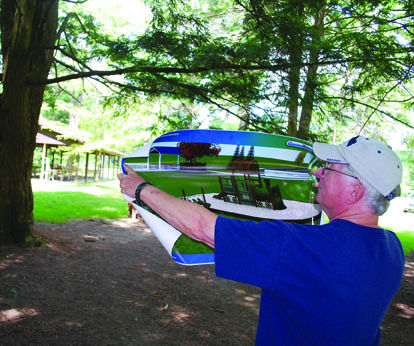 Hy Daley of the Mead Park Association holds up designs of a new playground that will soon be installed at the park. The current equipment, considered decades old and in deteriorating condition, will be removed following Glenn Mead Day in August. 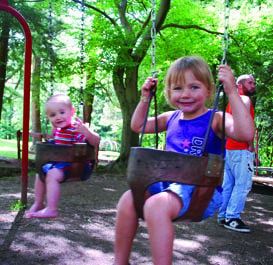 Peyton Odon, 3, right, and Gavin Odon, 1, both of Corry, enjoy the swings at Mead Park. Much of the equipment will be replaced with matching funds from the city and state.

An overhaul of outdated and dangerous playground equipment at Mead Park in Corry is scheduled to begin next month.

Members of the Mead Park Association detailed the replacement project to Corry City Council earlier this week. According to Hy Daley, member of the association’s committee on buildings and grounds, the overhaul will include the removal of much of the playground equipment, most of which has been at the park for decades.

“All of it, gone,” Daley said, noting that the city’s insurance provider recommended the equipment’s removal.

The initial phase of the project, being undertaken by GameTime of Pittsburgh, could be complete within three days once it begins after Glenn Mead Day in August. The same company was used to design and install playgrounds at Columbus Elementary School and the YMCA of Corry.

“I wanted more, but there is only so much we can spend,” Daley told council. “I’m hoping next year we can put in another swing for the little kids and a climbing wall for the bigger kids.”

Daley said the Mead Park Association is about $7,000 shy of completely funding the first phase of the $57,000 project. He said the association plans to appeal to area clubs for financial support.

“Hopefully they can help us make up that difference,” he said.

Daley said part of the project will include the cleaning of a ditch that runs from the wetlands at the park to Alice Lake. Stones will then be placed in the ditch. All of the playground equipment being replaced is north of the ditch; the remainder of equipment will be replaced at a later date.

“We want to clean the ditch,” Daley said. “We want it to look nice. Basically, what you have flowing there now is a swamp.”

“So that’s what your park is going to look like by September,” Daley continued, referring to designs by GameTime that outline the new equipment.

On any given summer day, the park is filled with kids and their parents. Ken Odon and his children Peyton, 3, and Gavin, 1, enjoyed the park earlier this week. Ken Odon said he will be glad to see new equipment at the park.

“You look at some of this stuff and you can just tell it’s old,” he said. “I’m glad that all of this will be replaced with some better stuff.”

The Mead Park Association, which oversees the city-owned park on Mead Avenue, was awarded in the fall a $12,120 matching Community Asset Grant from the Erie County Gaming Revenue Authority to replace the equipment at the park.

The grant was one of 21 totaling $156,778 awarded to arts, cultural, heritage, entertainment and recreational organizations.

City Council last year earmarked $36,000 in Community Development Block Grant funds to help pay for the conversion. The matching funds needed to secure the ECGRA funding will come from the CDBG money.

The ECGRA funds will be used solely for the equipment, while CDBG money will be used to finance the new equipment and costs for site preparation.

The association hopes to clean the ditch prior to installing the new equipment.

Both phases of the project could take more than a year to complete, Daley said.

“It could be 10 years before we have all the equipment out of the park,” he said. “We’re just trying to start somewhere. There’s a lot out here, especially with the lake.”