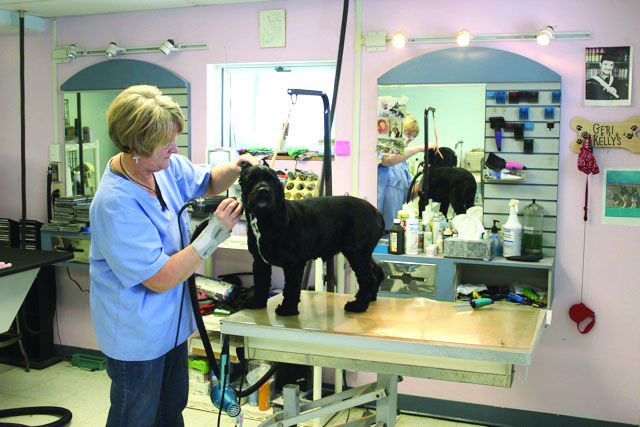 Geri Kelly gives a trim to one of her regular clients, Oliver, a black and white cocker spaniel. After a wash and trim, nail trim, and ear cleaning, all dogs leave with a collar bandana, often holiday-themed. 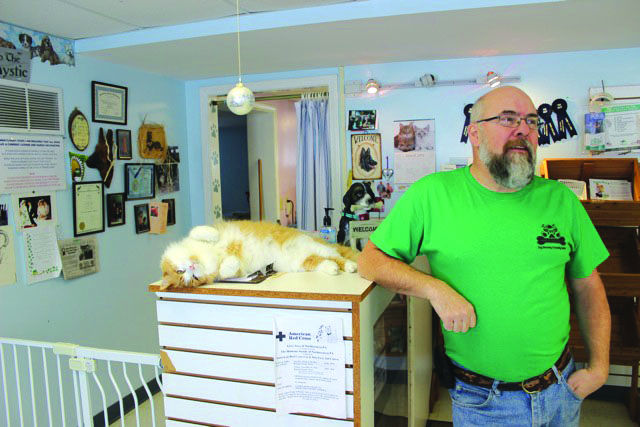 Welcoming clients to Geri Kelly's Classical Canines is Chris Kelly and Larry the cat. "Larry loves everyone who comes in, even the biggest dogs," Chris said. 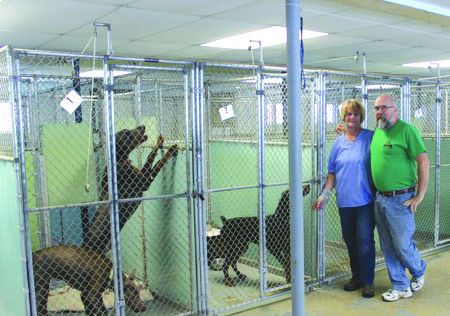 Geri and Chris are proud of their clean, well-lit boarding facility for both canines and felines. "We board both dogs and cats, but I only groom dogs," Geri said. "When grooming, dogs can be reasoned with. Cats are another story."

Geri Kelly gives a trim to one of her regular clients, Oliver, a black and white cocker spaniel. After a wash and trim, nail trim, and ear cleaning, all dogs leave with a collar bandana, often holiday-themed.

Welcoming clients to Geri Kelly's Classical Canines is Chris Kelly and Larry the cat. "Larry loves everyone who comes in, even the biggest dogs," Chris said.

Geri and Chris are proud of their clean, well-lit boarding facility for both canines and felines. "We board both dogs and cats, but I only groom dogs," Geri said. "When grooming, dogs can be reasoned with. Cats are another story."

UNION TOWNSHIP — When you hear the term “dog grooming,” you might picture a neatly trimmed Pekingese with a bow and a collar bandana.

While tiny dogs wearing accessories are a part of Geri Kelly’s Classical Canines business, few people realize the job description of dog groomer could be a viable segment on Mike Rowe’s “Dirty Jobs.”

Chris and Geri Kelly have owned and operated Geri Kelly’s Classical Canines on Concord Road in Union Township for the past 15 years. In that time, they’ve seen everything from Shih Tzus to St. Bernards walk through the door. Some come for grooming while others stay in the boarding facility. Some dogs love the process while others “have a more challenging temperament,” Geri Kelly said.

Geri’s love for animals was instilled by her mother, Luella Chippiga, who had her own grooming business when Geri was growing up.

“I wanted to have a boarding facility, and my mom encouraged me to also study and get a groomer’s license. I’m glad I followed her advice,” Geri said. “I received my license from the Pennsylvania Academy of Pet Grooming in Indiana, Pa.”

In 1997, the Kellys purchased the property at 9760 Concord Road, previously a dairy farm. Two years later, renovations to the dairy barn were complete and the couple opened for business in September of 1999.

Stepping into the building, clients are greeted by Chris and Geri, and their large and loving long-hair cat, Larry.

“Larry is friendly to everyone who comes in, even all of the dogs,” Chris said with a laugh. “And he’s bigger than a lot of the dogs who come in.”

Dog parents can utilize a comfortable waiting area — complete with coffee, tea and a television — or browse the small store while their dog is being groomed. The Kellys have a selection of Lupine collars and leashes, shampoos, and some toys, as well.

“Grooming is a time-intensive, sometimes physically demanding job, but we love it,” Geri said.

“We have regular clients who come for grooming every five to eight weeks, and we have some who come in twice yearly. It just depends on each breed’s need,” Chris said.

Dogs receive a bath, nail trim, ear-cleaning and hair trim. Because the Kellys have their hands on every inch of the dogs during the grooming process, “we are often the first to tell the owner of any bumps or lumps, ear infections, or ticks,” Chris said

Some dogs should be groomed more often than their owners think, Geri added.

“We have dogs come in and their fur is matted,” she said. “The owners don’t realize that a dog is suffering and can have some serious skin issues if its hair becomes matted. A regular trim will keep the dog happy and healthy.”

The Kellys also handle emergencies. But what constitutes a dog-grooming emergency?

“Skunky dogs make up most of our emergency calls, followed by long-haired breeds who got into burdocks,” Geri explained. “We have a special shampoo that breaks down the oils and combats the skunk odor, but there is no miracle cure. The scent will linger for a long time no matter what you do. As for burdocks, a good trim is the only cure.”

Working with state-of-the-art grooming tools makes the job a little less messy. Geri uses a “clipper vac” when giving the dogs a trim. The clipper and vacuum are one piece, and the benefits are twofold: The vacuum creates airflow over the clippers keeping them cool and eliminating any chance of burning the dog’s skin; the vacuum also immediately transfers all clipped hair to a holding tank, which is emptied daily.

The wash tub has a ramp allowing easier access for larger breeds. However, this doesn’t always translate to an easier time getting an unwilling dog into the bath.

“Once, I had a St. Bernard refuse to get into the tub,” Geri recalls. “He flattened himself to the floor and refused to budge. It took three of us lifting him to get him into the tub.”

The heated and air-conditioned facility is also licensed to house up to 24 dogs at any given time.

“We have 10 runs — four large and six small. We will allow family dogs to stay together in a run, two at a time, if the owner requests,” Chris said.

Classical Canines receives surprise inspections two times per year. Dogs and cats who board must be up-to-date on all vaccinations, have a reputable flea treatment and be worm-free.

“We walk the dogs two times per day in any weather,” Chris continued, “and we clean all of the runs regularly, two times a day or more.”

What advice do the Kellys have for dog owners this time of the year?

“Get your dog groomed before winter ends,” Geri said. “It’s winter now, but before you know it, all of this snow will be melting and everything will be mud. The shorter the hair, the easier it will be to clean up your dog.”

“Make the appointment now,” Chris said. “As soon as it gets muddy, our phone rings all day long, and we can only do so many dogs per day.”

“We have been blessed the past 15 years to have this business,” Geri said. “Chris and I love working together, we love what we do, and we love our clients.”

For more information, call 438-7935, or visit their website at classicalcanines.com.