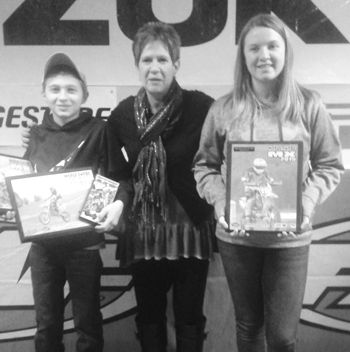 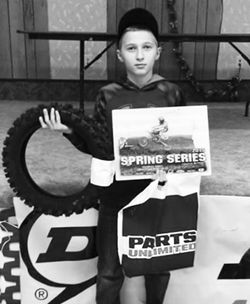 Nicholas Baker of Spartansburg won a new tire, gift certificates and prizes totaling about $300 during a motocross awards banquet in Butler, Pennsylvania.

Nicholas Baker of Spartansburg won a new tire, gift certificates and prizes totaling about $300 during a motocross awards banquet in Butler, Pennsylvania.

Siblings Baylee Roush and Nicholas Baker, both of Spartansburg, recently saw their hard work pay off during a recent motocross awards banquet.

The Mapleshade Motocross Awards Banquet was held at the Holiday Inn in Warren, with the duo each receiving awards.

Roush received third place in a women’s bike class, collecting a plaque and gift certificate to Support Plus.

Baker won a 65cc (ages 10 to 11) class and placed third in the Junior Mini class while riding his 65 cc bike against 85cc bikes.

Baker collected two plaques and gift certificates to Support Plus.

He also won the Most Improved Youth Rider for the second consecutive year.

He traveled all over western Pennsylvania to various tracks to win the 65cc (ages 10 to 11) class in that series as well.

Baker earned a plaque, a new tire and other various gift certificates and prizes totaling about $300.

That awards banquet was held in Butler, Pennsylvania.

Roush and Baker are second generation motorcross racers. They were born into a family that has been racing since the 1990s.

Roush is the daughter of Michael and Jessica Roush of Corry, and Jerry and Misty Miller of Spartansburg.

Baker is the son of Jason Baker of Lancaster, New York, and Jerry and Misty Miller of Spartansburg.